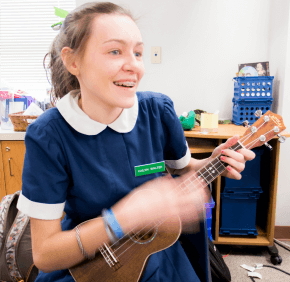 By Melody Simmons
Special to the Review
TOWSON – The tiny ukulele is having a mighty impact amid the spirit of the 780 students enrolled at Notre Dame Preparatory School.
Tunes that spring from the instrument have filled classrooms and soon may serenade dozens during lunch hours in the cafeteria of the all-girls school.
It’s all a part of ongoing practice sessions of a new group called “Ukuladies,” a community service club in its first year at NDP, thanks to the lighthearted vision of sophomores Julia Habiger and Hannah Schiavone.
“In freshman year, I thought, ‘I want to start something on my own,’ “ said Habiger, 16, a parishioner of St. John the Evangelist in Columbia. “NDP has a lot of clubs, but what’s something that hasn’t been done before?
“We decided to combine music and service – we would go around and play places. We would perform for people, the marginalized in society – little kids, the elderly or the homeless.”
On Dec. 16, the Ukuladies marked their debut at Brightview, a senior living community in Towson.
“We didn’t just have a performance,” Habiger said. “We sat with them and we talked with them and they told us that they had never seen a ukulele before.”
Schiavone’s grandmother was in the audience at Brightview. Although she suffers from dementia and lives in the memory unit there, her eyes sparkled as the ukuleles strummed out familiar songs and Christmas carols, Schiavone said.
“She remembers songs,” said Schiavone, a parishioner of St. Isaac Jogues in Parkville. “Whenever she comes over to my house, we do sing-alongs. For whatever reason, that just sticks with her.”
Habiger added: “Music is the universal language – it doesn’t matter where you are.”
Steven Pomplon, adviser for the Ukuladies, is head of service at NDP. He said the club is quickly becoming one of the most popular on campus. NDP has a total of 40 clubs, including a photo club, speech and debate, creative writing and Habitat for Humanity. Community service hours earned count toward a 60-hour graduation requirement.
“Our numbers are growing by the day,” Pomplon said, adding there are about 75 students who have expressed an interest in joining the club. About 55 of those students own a ukulele.
“This club was completely student driven,” said Pomplon, who plays his guitar alongside the Ukuladies. “I don’t play the ukulele. But it was a stroke of genius, I’ll tell you. It’s fun to be around.”
A2002 graduate of Loyola Blakefield, Pomplon said he has played guitar since he was in high school.
The Ukuladies, he said, plan to start practicing for their fellow students during lunch hours in the cafeteria. Many, new to the four-string instrument that has its origins in Hawaiian music, got them for Christmas gifts in order to join the club.
“It’s an accessible instrument,” Pomplon said. “The guitar has a steep learning curve, but the ukulele has basic arrangements and you can be playing in a matter of weeks if you put the time into it.”
Future plans for the Ukuladies include playing at area soup kitchens and hopefully back at Brightview in the spring. Their repertoire includes “Hey, Soul Sister”; “I’m Yours”; and “What a Wonderful World.”
There was even an impromptu performance in a biology lab last year when the club was forming, as a way to set the stage for the quirky and whimsical sound, said Habiger. “People are drawn to it,” she said. “You can’t be upset and have a ukulele playing. It’s very joyful –and it’s spunky.”
Also see:
Beyond the Bell: Loyola Blakefield forensics dominates Baltimore league
Beyond the Bell: Wide-ranging ensembles set apart Spalding’s music program
Beyond the Bell: With school-wide support, annual musicals take John Carroll’s spotlight
Beyond the Bell: Mount de Sales Club supports the troops
Beyond the Bell: Social Justice Coalition at Maryvale makes a difference
Beyond the Bell: Seton Keough’s A Cappella choir
Beyond the Bell: Catholic High robotics team raises the bar
Beyond the Bell: St. Frances Academy football takes leap of faith
Beyond the Bell: Calvert Hall’s peer ministry program makes faith cool
PrevNext