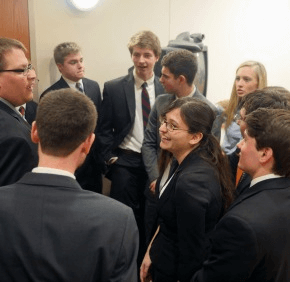 By Karen Osborne
kosborne@CatholicReview.org
Twitter: @ReviewOsborne
CUMBERLAND – A neighborhood youth is dead, shot by a decorated police officer.
That is the setup for this year’s mock trial team at Bishop Walsh School in Cumberland. Sometimes, the 13 high school teammates serve as prosecution in the officer’s court case; sometimes, they are his defense.
While the characters in a mock trial are entirely fictional, everything else echoes reality. The trial is held in a real courtroom. Students wear suits, state their objections, ask for permission to approach the judge’s bench, present evidence and cross-examine witnesses. Bailiffs call “all rise” for the judge, and no cameras are allowed in the courtroom – even from proud parents.
This year’s trial, prepared by more than 100 schools across Maryland, echoes recent news stories from Ferguson, Mo., and Sanford, Fla., and requires students to analyze evidence, memorize speeches, formulate arguments and know the facts of the case inside and out. To get ready for competition, Bishop Walsh students debated the issues, developed their public speaking skills and learned about forensic science.
Although much of mock trial competition is scripted, students have plenty of opportunities for extemporaneous speaking, and must be able to respond as their characters would to cross-examination, according to coach Tony Orndoff.
Competitors are graded on their dramatic performances as attorneys and witnesses, as well as how well their teams presented a cogent legal argument to back up their position as prosecution or defense.
“Once the trial starts, you’re not sure where it’s going, and you have to trust yourself to think on your feet,” Orndoff said. “You have to be smart, but that’s not enough. You also have to be driven and you have to be competitive.”
Orndoff is a 1997 Bishop Walsh graduate and a veteran of the same mock trial team he now coaches.
“I made lifelong friendships through (mock trial),” he said. “It gave me a lot of confidence, which wasn’t something I had a lot of growing up.”
For student Jeannie Smith, those friendships are a key part of why she enjoys mock trial competition.
“We get to hang out with people who aren’t exactly the same as us,” she said. “We bring together this group of intellectuals from every sport and activity. Even though our school is really small and we all know each other, we get to know each other better. We see all these brilliant people come together, and it’s awesome.”
Student Jill Courtney, who plays the lead defense attorney, said that being involved in mock trial has inspired her to consider a career in law.
“I’m involved in mock trial because I care about justice in the world,” she said. “I want to be a prosecutor, because I want to make sure justice is served. My favorite part of mock trial is getting together with these intellectuals and arguing the case.”
During the Feb. 10 trial, the state – played by Allegany High School – prevailed by one point, and the officer was convicted. Although Bishop Walsh lost, a wild-card rule ensured that they would still go to the state-level competition.
“They performed the absolute best that they could,” Orndoff said. “I’ve never felt this content after a loss. Students are really the stars – they are outstanding kids and driven in a way that is refreshing to see. They’re asked to do a lot, and they always do it, and love it.”
Also see:
Beyond the Bell: Curley Jazz ensemble is more than just music
Beyond the Bell: Mercy sophomore inspires, one teddy bear at a time
Beyond the Bell: St. John’s Catholic Prep ski club hits the slopes
Beyond the Bell: Ukaladies strum a happy tune
Beyond the Bell: Loyola Blakefield forensics dominates Baltimore league
Beyond the Bell: Wide-ranging ensembles set apart Spalding’s music program
Beyond the Bell: With school-wide support, annual musicals take John Carroll’s spotlight
Beyond the Bell: Mount de Sales Club supports the troops
By giving food to neighbors, IND roots holiday – and students – in giving
Beyond the Bell: Social Justice Coalition at Maryvale makes a difference
Beyond the Bell: Seton Keough’s A Cappella choir
Beyond the Bell: Catholic High robotics team raises the bar
Beyond the Bell: St. Frances Academy football takes leap of faith
Beyond the Bell: Calvert Hall’s peer ministry program makes faith cool
PrevNext