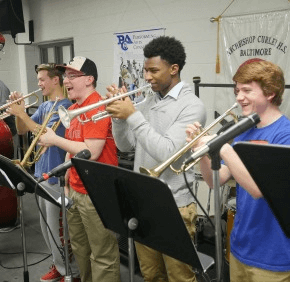 By Karen Osborne
kosborne@catholicreview.org
Twitter: @ReviewOsborne
In the Jazz Ensemble at Archbishop Curley High School in Baltimore, nobody “tries.” Longtime music teacher David Stauffer expects his students to do far more than that.
Stopping the band after hearing a ragged, unraveled saxophone line in Chuck Mangione’s “Children of Sanchez” at a recent rehearsal, he reminded that when it comes to impressing an audience, “You get one chance. The notes have got to be there. Trying is … ”
“An excuse for failure,” the young musicians replied in unison, with knowing laughter.
High standards and superior musicianship are the norm at Curley. Under Stauffer’s leadership for more than three decades, jazz band members develop discipline and a lifelong love of the art while mastering difficult repertoire.
That commitment will be on display March 7, when the school’s cafeteria will be transformed into a nightclub for “All That Curley Jazz.” The centerpiece of the jazz program at the all-boys high school, the annual concert will feature student performances as well as selections from Curley alumni who are now professional musicians.
Students are required to practice five hours per week, attend sectionals for specific instruments, and meet regularly in small combos to go over difficult passages – all in preparation for the weekly Tuesday night rehearsal, where chords come together and the band becomes what members describe as a “brotherhood.”
Again, achievement, rather than effort, is the goal.
“If you just try, that’s going to leave it in your mind that that’s all you have to do,” explained bassist Chimaobi Iwumune. “If you tell yourself … you have to do something to get good enough, then you’ll get to your goal.”
The band fosters relationships beyond music.
“Sometimes we fight,” Stauffer said, “then we love each other pretty hard other days.”
Senior trombonist Justin Woodbury likened the band to a “second family.”
“It gets really stressful, but in the end we’re all here for each other,” he said. “These guys are all my brothers.”
Iwumune went so far as to say that, “Mr. Stauffer is like my second father. He’s brought me through so many things and made me who I am today.”
Stauffer has a hard time keeping track of the Curley grads who have studied music in college or played professionally, and said the key to the jazz band’s legacy is treating music education not as an optional extracurricular, but as an essential part of life.
“Instrumental music is a microcosm,” explained Stauffer. “All the parts of everything they do in their life are in music. It’s a must for me that we give them the kind of education that teaches them a sense of proportion and mathematics, that teaches them great literature.
“It’s a course where we teach life skills, not just instrumental music.”
“Jazz helps you reach into yourself and pull out what you truly see,” Iwumune said. “It shows you what kind of human being you are. It all pulls out from your characteristics, your traits, how you interpret things in the world.”
Junior saxophonist Emmanuel Adjaye, who first heard the jazz ensemble during an eighth-grade school tour, explained that being a part of the jazz ensemble requires students to do more than just read music. It extends to getting notes right, and understanding musical dynamics and theory.
“You always have to focus on the details,” he said. “That’s what counts.”
That laser focus on the small things, Adjaye says, is one of the reasons he loves rehearsal.
“You might be stressed,” he said, “but when you come into jazz, all that stress and emotion just comes through your instrument. If you’re angry and overwhelmed, you just play through the instrument. In jazz, if you play the instrument, it’ll all be fine.”
Also see:
Beyond the Bell: Mercy sophomore inspires, one teddy bear at a time
Beyond the Bell: St. John’s Catholic Prep ski club hits the slopes
Beyond the Bell: Ukaladies strum a happy tune
Beyond the Bell: Loyola Blakefield forensics dominates Baltimore league
Beyond the Bell: Wide-ranging ensembles set apart Spalding’s music program
Beyond the Bell: With school-wide support, annual musicals take John Carroll’s spotlight
Beyond the Bell: Mount de Sales Club supports the troops
By giving food to neighbors, IND roots holiday – and students – in giving
Beyond the Bell: Social Justice Coalition at Maryvale makes a difference
Beyond the Bell: Seton Keough’s A Cappella choir
Beyond the Bell: Catholic High robotics team raises the bar
Beyond the Bell: St. Frances Academy football takes leap of faith
Beyond the Bell: Calvert Hall’s peer ministry program makes faith cool
PrevNext