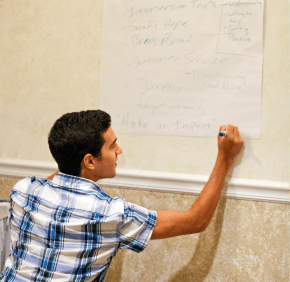 By Paul McMullen
pmcmullen@CatholicReview.org
Twitter@ReviewMcMullen
TOWSON – What do Lenten prayer groups, Haiti, Montana and the Turkey Bowl have in common?
All benefit from the touch of peer ministry at Calvert Hall College High School in Towson.
Begun in 2008, the program develops the communication and leadership skills of approximately three dozen service-oriented upperclassmen.
In turn, they encourage the rest of the student body, whether it be sharing Scripture with a handful of others before school, or leading service immersion trips to St. Marc, Haiti, or the Blackfeet reservation in Montana.
“Peer ministry pulls from all areas and interests, athletics, band, you name it,” said peer minister Paul Schwing . “The thing we have in common is we all come together and share.”
To view a photo slideshow, navigate the arrows below.
Schwing and other ministers answer the call, as their web page states, to simply help “another student cope with the stresses of everyday life with an open and accepting attitude.”
What might those stresses be?
Perhaps your father’s business is in danger of going under, and it’s impacting your ability to focus on school. Maybe a family member was a victim of a crime, and is suffering from post-traumatic stress.
Listening is a vital skill for a peer minister, as is talking about one’s problems in the first place. They step up on a retreat or similar group setting and give witness, perhaps about the people and events that helped shape them, showing others how to do the same.
“A lot of guys are reticent, but the group does a good job of encouraging,” said Sherill Sen, another senior. “It’s a safe environment to share.”
Schwing and Sen, parishioners of St. Joseph in Cockeysville, and Greg Bullen, who attends St. Isaac Jogues in Carney, discussed the program while preparing for a mid-August retreat for all peer ministers at the Monsignor O’Dwyer Retreat House in Sparks.
Peer ministers do more than empathize; they also devise solutions. Bullen cited the 2013 Turkey Bowl, when the Cardinals renewed their football rivalry against Loyola Blakefield at Towson University’s Johnny Unitas Stadium.
“You get a text, ‘We need a number of guys to help with Thanksgiving food drive,’ and we had six, seven at the stadium, manning a table,” Bullen said. “The more involved you are, the more successful you are going to be. There are always things we have to do.”
When it comes to serious issues, there is a safety net.
“We don’t expect them (peer ministers) to fix them,” said Elisabeth Mueller, who teaches religion and works in campus ministry. “It’s made very clear, if someone is being hurt, or hurting someone, we will deal with that in the school setting. We don’t put that responsibility on peers.”
One Calvert Hall grad points to peer ministry as helping him “come out of his shell.”
“I came from public schools, and didn’t know anyone at Calvert Hall,” said Michael Seicke, class of 2013. “I was always introverted, never wanted to speak up, but did that over and over in peer ministry. I don’t think I would be able to do what I did this summer without it.”
A rising sophomore at Towson University, Seicke spoke by phone from San Diego, where he was completing a summer internship. His resume includes initiating a service immersion trip to Chicago in April 2013, where he and 10 other Calvert Hall students volunteered at a San Miguel school and a soup kitchen.
As its web page states, peer ministry “makes faith cool.”
“Living out the Gospel is best done in groups,” said Zac Ufnar, another teacher who directs campus ministry. “Peer ministry enables them to live out their faith. It’s 36 guys on the same page, the same wavelength.”
Editor’s note: During the 2014-15 school year, the Catholic Review will look “Beyond the Bell,” exploring an extracurricular activity at each of the 20 high schools in the Archdiocese of Baltimore.
Also see:
With senior, first-grader and three in between, St. Mary’s family kicks off the school year
Schools collaborate to improve Catholic education
1,600 educators gather for Catholic schools convocation
PrevNext