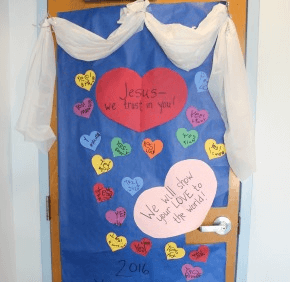 BEL AIR – From the pew to the playground, the relationship between the Year of Mercy and the daily rhythms of St. Margaret School in Bel Air appears seamless.

Like every other Catholic school and parish in the Archdiocese of Baltimore, St. Margaret displays a vertical banner proclaiming the Year of Mercy, the “Extraordinary Jubilee” which Pope Francis called to be celebrated from Dec. 8, 2015, to Nov. 20, 2016.

Principal Madeleine Hobik and her staff found many other ways to incorporate the Year of Mercy into the lives of their students.

The school annually marks Catholic Schools Week by decorating the doors of its classrooms, which this winter include the thoughts of students on the theme of mercy.

Empathy was evident on the entrance to Nicole Thomas’s fifth-grade homeroom, where Zac Huber wrote “Please help me understand what my patients need,” alongside a photo of a doctor examining a boy.

Sofia Zarzycki and Zac Huber were among the fifth-graders contributing their thoughts to the Year of Mercy-themed entrance to Nicole Thomas’s homeroom at St. Margaret School in Bel Air. (Paul McMullen/CR Staff)

Students earn “peace tickets” for acts of mercy, such as when Collin Moore, one of Doug Sharretts’ fifth-graders, invited a classmate who had been “left out at recess” to play soccer.

Those boys shared their experiences the morning of Feb. 24, when the petitions for the weekly morning Mass for St. Margaret elementary students included “For all who break the law, that they may someday realize how much God loves them and wants them to turn away from wrong-doing and join God in heaven … ”

That was no trifling intercession, coming two weeks to the day after two Harford County sheriff’s deputies were slain in nearby Abingdon. There are at least 17 St. Margaret School families with close ties to law enforcement; St. Margaret students are creating prayer cards for that community.

Embracing the spiritual and corporal works is nothing new at St. Margaret, a 2013 National Blue Ribbon School that enrolls 695, pre-K-3 to grade 8.

Since 2000, St. Rose of Lima School, in Jacsonville, in the Diocese of Hinche, has been sponsored by St. Margaret School. In 2004, students collected 1 million pennies to construct “The Penny Bridge,” making for safer access to the school. Its founder, Gabriel Thelus, visited St. Margaret Feb. 24, shepherded by Carol Delss, who began the relationship when she was an assistant principal.

Delss said that in most years, 25 to 30 percent of St. Rose of Lima’s 300 students receive their sponsorship costs of $425 from St. Margaret families.

“Gaby (Thelus) has said it many times,” Delss said, “without St. Margaret, the school would not be in business.”

St. Margaret School is large enough to require two campuses, as middle-schoolers have been housed since 2001 on the grounds of St. Mary Magdalen Mission, three miles to the northeast of St. Margaret Parish and the elementary.

Students are taught to identify and respond to need not just in Haiti, the western hemisphere’s most impoverished nation, but in their own community.

Middle-schoolers help serve when it is St. Margaret Parish’s turn to host the local interfaith cooperative food ministry. Student leaders from grades 6-8 recently visited the Welcome One Emergency Shelter in Belcamp, the only shelter of its kind in Harford County.

“We took eight boys and girls to visit the facility, while the clients were out on their day’s business,” said Betty Hunter, a retired St. Margaret teacher who coordinates outreach at the school. “They were in awe, that as many 38 people could be housed in such a small space.”

Student leaders from third grade and up chose St. Margaret School’s theme for the year, “Be the Peace.” A random selection of the school’s saint for the year came upon St. Thérèse of Lisieux, the “Little Flower,” a favorite of Hobik, the principal.

“You don’t have to be on the news, raising $1 million for the poor,” said Cecilia M. Pleiss, admissions director of St. Margaret School. “The little things are what make the difference.”

Faithfulness in Mercy is God’s way of being, pope says