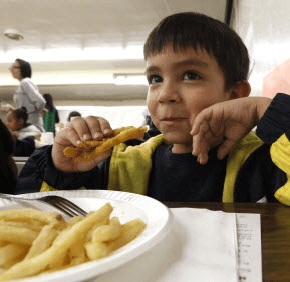 WASHINGTON – If parents want their children to eat healthy, they need to put some time and creativity into packing school lunches and also get their children involved in the process, according to health experts.

Registered dietitian Tracy Bryars said having time to prepare a healthy lunch could be the biggest struggle for parents who want their children to eat healthy.

Although children are often picky about the foods they will eat, Bryars suggests giving them a variety of foods in their lunches, exposing them to as many foods as possible.

Bryars is manager of the Healthy for Life Program at St. Joseph Health in Orange County, Calif., which is a system of health care facilities.

“Expose their taste buds at a young age. Kids can be frightened of trying new foods. Sometimes it takes10-15 times for a kid to like a certain food,” she said in a phone interview with Catholic News Service.

She urged people think about “the 80-point rule.”

Bryars also urges parents to get their children involved in lunch packing.

She said if children pack their own lunches, they might be “less inclined to swap at school.”

She also said children should learn early on about making good choices such as picking vegetables instead of sweets and water or low-fat milk instead of soda.

– Pack part of lunch in a thermos such as soup, oatmeal or pasta.

– Use a whole wheat tortilla for sandwich instead of bread.

– Freeze string cheese overnight before packing so it is cold at lunchtime.

– Try different fruits and vegetables such as cantaloupe, nectarines, peas or kale.

– Try to choose foods that are less processed.

But not matter what is packed, the school environment is also an influence, Frenn pointed out.

“Oftentimes it’s a struggle for kids to eat healthy because of peer pressure,” she said.

Frenn also noted that faculty members can be nutritional role models. She said if a student sees a soda on a teacher’s desk, it is a bad example, but “if they see them drinking water and eating healthy food, it’s going to have an impact.”