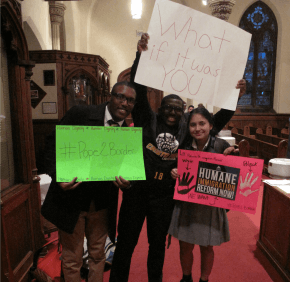 By Erik Zygmont ezygmont@CatholicReview.org Twitter: @ReviewErik
As Pope Francis celebrated a Mass Feb. 17 in Ciudad Juarez, Mexico, near the U.S. border, Baltimoreans joined him at St. Patrick in Fells Point, participating in a special Mass in solidarity with both the pope and the immigrants affected by the border crisis.

“I think in light of everything that has been happening – especially with unaccompanied youth and mothers arriving with children – at the border, it’s important to bring attention to it,” said Giuliana Valencia-Banks, a legal assistant for the Esperanza Center, a Fells Point-located Catholic Charities facility serving immigrants.

The Mass was a joint effort of the Esperanza Center and Christine Gallagher, campus minister at Cristo Rey Jesuit High School in Fells Point.

“This is an issue that affects many people in the community, and many of our students,” Gallagher said. “As men and women who are with and for others, we are blessed to be able to raise our voices.”

“I believe people shouldn’t be deported,” said Riccy Amador, a sophomore. “Deportation separates families, and that causes so much harm.”

Amador said she has a friend who is living with her uncles because her parents were deported when she was young.

“There’s a difference between parents and uncles,” she said. “Parents are supposed to be the ones who teach you right from wrong.”

Jesuit Father David Brooks, a pro bono attorney for the immigration legal services division of the Esperanza Center, was the main celebrant. Redemptorist Father Bruce Lewandowski, pastor of Sacred Heart of Jesus-Sagrado Corazón de Jesús in Highlandtown as well as its mission parish, St. Patrick, was the concelebrant.

In his homily, Father Brooks noted the similarities between Pope Francis and the prophet Jonah, the subject of the First Reading, as both are known for “telling people what they don’t want to hear.”

He noted that the pope often decries violence while exhorting the world to a change of heart.

“Where does he go to say that? He goes to the most violent city in Mexico – Ciudad Juarez,” Father Brooks said, noting the pontiff’s audacity.

“It’s not only up to us to join in the prayers of the pope, but that we acknowledge that we are part of this violence of the world, and we have to change our hearts,” Father Brooks added, switching deftly between English and Spanish throughout his homily.

“I feel that everyone should have equal rights,” said Cristo Rey junior Akeem Lyne. “There’s something called human dignity, and we’re all entitled to that.”

Gallagher said other Jesuit schools and institutions across the country participated in similar Masses, as members of the Ignatian Solidarity Network.

Following the Mass, the congregation was invited sign a letter to Congress from the Ignatian Solidarity Network, urging lawmakers to “commit to humane policies that respond to the realities of our hemisphere.”

St. Patrick is not the only church celebrating the pope’s visit to Mexico. As part of “Immigration Weekend” at St. Ignatius in Baltimore, Father Brooks will concelebrate the 10:30 a.m. Mass Feb. 21, also in support of humane treatment of those affected by the border crisis.

Following the Mass, Father Brooks will make a presentation with one young man who arrived in the U.S. As an unaccompanied minor and has since received a green card and another who was granted Deferred Action for Childhood arrivals and will now be eligible for employment authorization in the U.S.

After the 6 p.m. Mass, Valencia-Banks will join Father Brooks in his presentation.

Building walls to keep immigrants out is not Christian, pope says