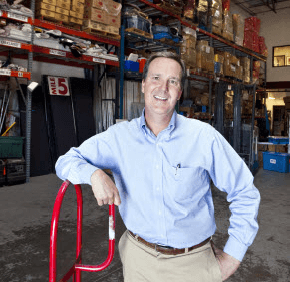 ELKRIDGE – Lee Corrigan grew up in a home where the Golden Rule was emphasized.

“I live by that in business and dealing with people,” said Corrigan, a parishioner of St. Louis, Clarksville. “It’s important you feel good about what you’re doing, (that) you’re doing something that truly benefits people.”

Corrigan is president of Corrigan Sports Enterprises (CSE), a sports and event marketing firm that organizes regional events, most notably the Under Armour Baltimore Running Festival. The event, which includes the Baltimore marathon, is Oct. 13.

“We wanted to create events where there was a need in the community,” Corrigan said.

“Coaching is definitely a passion,” said Corrigan, a Rough Riders coach who hails from a family with a long-standing history in athletics.

His father, Richard Corrigan, was a lacrosse All-American at the University of Maryland, then coached lacrosse at Yale University and other colleges.

His aunts and uncles include Mary D’Ambrogi, a local field hockey and lacrosse coach and administrator who once ran prison ministry for the Archdiocese of Baltimore, and Gene Corrigan, former athletic director at University of Notre Dame and commissioner of the Atlantic Coast Conference.

“I got to be around a lot of sports people,” said Corrigan, 49. “I just kind of followed. Some of our life falls into place by mistake.”

In the late 1990s, Corrigan first pitched his idea for the Baltimore marathon to then-Mayor Kurt L. Schmoke.

More than 25,000 runners are expected to participate in this year’s festival, said Corrigan, an increase of about 18,000 participants since the 2001 inaugural.

The economic impact in Baltimore from the event is $30 million, said Corrigan, who noted the festival costs $2 million to operate.

“The Baltimore marathon is something we’re very proud of,” Corrigan said.

In the past, the finish line has been between Oriole Park at Camden Yards and M&T Bank Stadium. That location is problematic this year because of the unexpected success of the Orioles, who could conceivably be home for Game 1 of the American League Championship Series Oct. 13.

If that longshot comes through, Corrigan is prepared to move the finish line, normally down Eutaw Street and past the Camden Yards warehouse a few hundred feet back, to Hamburg Street.

Planning for the 2013 festival will begin Oct. 15, a mere 48 hours after this year’s race ends, said Corrigan, who calls himself the event’s “head coach.”

“We know this (the festival) is truly helping people,” said Corrigan, who noted $1 million goes to charity each year. “That makes us feel good.”

As the head of CSE, Corrigan draws on the lessons his parents taught him decades ago.

“We’re like a big family here,” Corrigan said of his staff. “Everyone has a say and they have a real say. That’s part of being a good leader. You go a lot further with people that way.”

Chris Tomlinson, vice president of marketing for CSE, said after 15 years he continues to work for Corrigan because of the type of leader he is.

“He takes great care of his people,” Tomlinson said. “I know he has my best interest in mind when he makes a decision.”

Quote: “Be careful what you wish for and you could get it,” said Corrigan, who decided early in his career he wanted to live “the American dream” and start his own business.