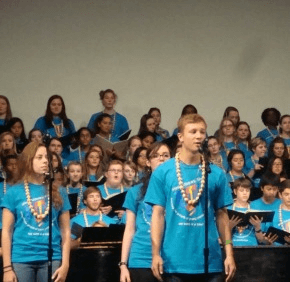 Ryan Slattery
Fifth in a series, “How I Spent My Summer Vacation”
The youths and young adults who attend Music Ministry Alive! summer institute in Minnesota seem to return to their parishes with a common goal: Sharing their talents, as opposed to showcasing them.
“(Music ministry) is less of a concert and performance, and more of a prayer,” said alumnus Vince Ray, 18, a freshman at Towson University and graduate of Archbishop Curley High School in Baltimore.
The flautist, who attended Music Ministry Alive! in 2015, is part of the contemporary music group at his parish, St. Ursula in Parkville, and also lends a hand at St. Ignatius in Hickory.
Although the start of his college career kept Ray from returning to the institute this summer (participants are encouraged to attend three times), he did encourage fellow St. Ursula musician Natalie Pucillo to go in July.
“It was absolutely incredible,” said Pucillo, a clarinetist, of the institute, led by famed musician and hymn composer David Haas with longtime collaborator Lori True.
“Everybody there was so incredibly passionate about music ministry and what we’re doing for the church and the youth of the church,” she added. “What’s going to happen in the future starts with us.”
Music Ministry Alive! has since 1999 brought together young musicians on the campus of St. Catherine University in St. Paul and Minneapolis, Minn., where True is campus minister for liturgy and music.
“Everybody there is of the same makeup, in that they want to make music, and they want to make music in the church,” said Tom Hoerl, a guitarist and singer with the St. Ursula contemporary group. “It’s almost like a nirvana for them, in the sense that everybody there gets it.”
Hoerl has attended the five-day institute several times and has been the force behind St. Ursula’s youth attending.
“The youth are what will drive us in the future,” he said. “If we don’t get them involved now, when they’re interested and available, we’re going to lose them.”
Ray and Pucillo said they gained more than fellowship and inspiration from Music Ministry Alive!
Ray, who followed a track specifically tailored to the flute, said that the instruction and advice he received was quite detailed, down to the role of his tongue in expelling musical notes to correspond with consonant- or vowel-heavy lyrics.

Pucillo, a sophomore at The Catholic University of America in Washington and a graduate of Notre Dame Preparatory School in Towson, said that she enjoyed in-depth insight into reading the lyrics of the songs she was accompanying.
“It was about really looking at what these songs are saying, rather than going into what I call ‘musician-brain,’” she said. “It’s a prayer.”
She added that the institute helped her appreciate the difference between music ministry and secular music.
In an informal conversation with Tony Alonso, another prolific liturgical composer, a student asked, “What is it like to experience hundreds of people hearing one of your compositions?”
“He kind of paused,” Pucillo remembered, “and said, ‘Whether it’s one person or a hundred people, it’s wonderful, because it’s for God.’”
That’s not to say liturgical musicianship never opens any physical doors.
Ryan Slattery, a cantor at St. Peter the Apostle in Libertytown and a fellow Catholic University sophomore, attended Music Ministry Alive! during summers from 2013 to 2015, and got to know Haas in the process, so well that the composer asked for his help this year at the annual convention of the National Association of Pastoral Ministers, held in Houston in July.
A graduate of Mount St. Joseph High School in Baltimore, he is now studying vocal performance with an eye toward becoming a liturgical composer or music director.
“I think in general music speaks to everyone,” he said, “and that’s why it makes sense to have music in religious services. You’re able to touch people in a way that only music can.”
“You’ve heard the saying, ‘Singing is praying, twice,’” he added. “I think that’s really true.”
Haas and True are planning a concert Sept. 9 at 7 p.m. at St. Joseph in Cockeysville; information and tickets are available at sjpmd.org/fallevents.
Also see:
Mount St. Joseph High has memorable mission to South
Abingdon ‘Shadow Players’ share theatrical gifts with parish
PrevNext