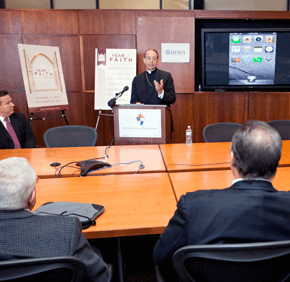 Baltimore Archbishop William E. Lori announced a mobile version of the archdiocese’s website, archbalt.org, during an Oct. 11 press conference at the Baltimore headquarters of CR Media, parent company of the Catholic Review.

The archbishop began the meeting by praying for the family and victims of an early morning fire in a Baltimore rowhouse. He also acknowledged the service of former Maryland Senator Clarence Mitchell III, who also died this morning.

The 16th archbishop of Baltimore drew laughs from those gathered when he said, “I, who am in the Stone Age when it comes to technology, will demonstrate how to use the new Archbalt app” before showing off its features.

The Archbalt.org/mobile application includes some of the most popular features of the website – archdiocesan news, parish and school locators, events and directories of information.

The free app is available for iPhone and Android phone users, said Bill Glover, the archdiocese’s chief information officer and director of technology. iPhone users can download the app from the App Store, Android users from Google Play.

There are no plans to release the app for BlackBerry phone users, said Glover, who noted the app is also accessible on tablets, including the iPad.

“The app is boiled down, focused on the key functions that we see most people coming to our website for,” Glover said. “We’re just making that more accessible and a better user experience.”

Fig Leaf Software, a Washington, D.C. firm, built both Archbalt.org and Archbalt.org/mobile. The business has done work for the U.S. Conference of Catholic Bishops, the National Catholic Educational Association, the U.S. Congress and the U.S. National Park Service.

“The archdiocese is known as the Premier See, and we want the archdiocese to be known as premier technologically as well,” Glover said. “It is our intention to make the Archdiocese of Baltimore far more digitally accessible to anyone. We see this as an extension, another digital doorway or portal into the archdiocese.”

The app can also be used to find information about the Year of Faith, which began Oct. 11 and concludes Nov. 24, 2013.

Matt Palmer contributed to this article.