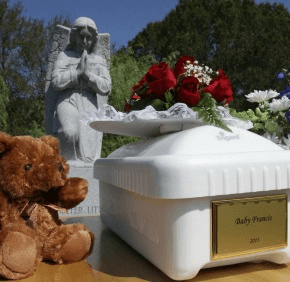 In a simple, but dignified ceremony June 10 in a section of Gate of Heaven Cemetery set aside for the repose of babies, Bishop Thomas J. Tobin of Providence presided over a Christian burial service for the unborn child he named “Francis,” fulfilling a commitment he made to officials five months ago after a fetus was found floating amid the sewage at a nearby wastewater treatment facility.

A tiny white casket, with “Baby Francis 2015” inscribed on a gold plaque affixed to one end, and flanked by flowers and a small teddy bear, rested upon a portable pine altar as the burial service was conducted under a brilliant blue sky.

“Now, we must entrust the soul of Baby Francis to the abundant mercy of God so that this beloved child may find finally a home in his kingdom,” Bishop Tobin prayed before a gathering of about 20 individuals representing the Diocese of Providence and its active Respect Life Office and Human Life Guild.

Despite a five-month investigation into the case, not much is known about the circumstances in which the unborn child ended up at the Bucklin Wastewater Treatment Facility Jan. 12, when a worker saw what at first appeared to be a doll floating amid the slurry in a collection area of the plant’s Screen and Grit Building, according to the East Providence Police Department.

At the time, the bishop offered a “decent and proper burial” for the unborn child, also offering prayers for his parents and the situation that led them to dispose of a child in such a tragic way. The medical examiner’s office indicated the child was a male, about 19 to 20 weeks gestation, but could not release the body while its investigation was ongoing.

The bishop asked Msgr. Albert A. Kenney, his vicar general and moderator of the curia, to remain in contact with the authorities.

On June 5, the body was released to the custody of the diocese, and was sent to the Boyle Funeral Home, which donated its services and the casket. St. Gabriel’s Call, a ministry of the diocesan Office of Life & Family, provided the flowers and gravestone that will read “Baby Francis – 2015.” The Catholic Cemeteries Association donated the burial plot.

Bishop Tobin said he chose to name the baby Francis in honor of Pope Francis’ eloquence in encouraging Catholics to change the “throwaway culture” of abortion that pervades society today.

“This child is certainly a victim of that throwaway culture,” he said.

The bishop again prayed for the parents of the child that God “will lift them up and help them through whatever difficult circumstances or sufferings that may have led them to this moment.”

While acknowledging that not much is known about how Francis came to be in that sewage plant back in January, something very important is known about the child.

“Every child bears the face of Jesus, this child does as well.”

Peter Cotnoir, who is entering his senior year of minor seminary in the diocese, assisted in the burial service.

He said that despite having served and attended many funerals through the years, this one was especially somber for him, since it was for a child.

He lamented all of the unborn who are aborted and never get the chance to have a dignified burial.

“It’s almost like they disappear,” he said of those babies that are aborted. “Even after an abortion, there is still a body somewhere.”

Carol Owens, director of the Office of Life & Family, as well as the Human Life Guild, said the plight of Baby Francis will inspire others to take up the mantle of prayer in the challenge to overcome the throwaway culture spoken about by Pope Francis.

“We’re going to come out here in October, and May, during months of devotions, and invite people to join us in praying the rosary for Baby Francis and all of the babies here,” Owens told the Rhode Island Catholic, Providence’s diocesan newspaper.

“This is giving the respect and the dignity to every life, and it’s very, very important that we do this,” she added.

One of the most poignant moments came after the burial service concluded, and those in attendance drove away.

A couple who visit Gate of Heaven every day to spend time at the grave of the unborn child they lost to a miscarriage in April, and who were present at the beginning of the service nearby for Baby Francis, stepped out of their car and proceeded to kneel at the fresh grave of the child known only to God. They placed a pot of sunny yellow mums down at Francis’ grave with a message that their thoughts and prayers are with him.

“These babies meant something,” Danielle Moniz said of the need to honor the dozens of babies buried there who didn’t get a chance at life, including Baby Francis.

She and her husband, Distefano, said they named their unborn daughter Faith because their belief that she is happy in heaven is what sustains them despite their sadness.

“The only way we can get though this is believing and having that faith that she is now an angel and she is now with God. If we don’t have that, then we have nothing. That’s what’s keeping us going.”

Georgie’s story: Choosing life when the prognosis is death