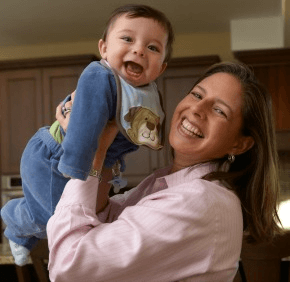 WOODSTOCK – When Kerry Becker received a diagnosis of stage III breast cancer in 2013, her initial worries were not for herself.

“My fears were more for everyone else,” said Becker, then a mother of three who got the news after her first mammogram, which she received at the doctor-recommended age of 40. “What would my kids go through?”

They went through a lot – even her youngest, Ethan, a toddler at the time, would awake at night, sensing something was off – but three years later, God has answered Becker with a clean bill of health.

Furthermore, God has found her heart large enough to accommodate a fourth child. Jacob Cai was born May 16; his middle name means “Rejoice.”

“He smiles from the inside out,” Becker said.

Although she notes with a bit of trepidation that she will eventually have a 2-year-old and a teenager under the same roof – her eldest, Joelle, is 11 – she can’t stop calling Jacob her “unexpected miracle.”

Few things that happened over the last few years of Becker’s life fall under “expected.”

It started with the shock after the initial mammogram, which Becker, a podiatrist, underwent at a radiology office that employs her husband, Randy.

“His colleague had to tell him and show him the images,” she said.

The Beckers contacted Dr. Maryam Jaberi, a surgeon affiliated with St. Agnes Hospital in Baltimore and a college friend of Randy’s, and scheduled a biopsy for two days later. While it confirmed the worst – “The pathologist saw evidence of invasive lobular cancer,” Becker said – the surprises became more positive from there.


First, she was spared the grueling marches to different hospitals and offices that are the norm for a cancer battle; hers was fought entirely with St. Agnes, home to her primary care doctor and gynecologist as well.

“Having that institution – the facilities and the doctors they have – has been amazing,” said Becker, who gives back by attending cancer support group meetings at the hospital.

She met with Mary Ellen Bilenki, nurse navigator of the hospital’s Breast Center, as well as doctors responsible for the different aspects of cancer treatment.

“I just gave her a little advice here at the cancer center,” Bilenki said. “I said, ‘You’re going to know what is right for you.’”

Becker’s surgery, on July 3, 2013, was just a few weeks after her diagnosis, which had categorized her breast cancer as the less common and less understood “triple-negative” variety.

“Everybody decided, because there was less known about it, it was best to get it out as soon as possible,” she said.

Once that hurdle was cleared, she had to choose a place to receive chemotherapy. Her epiphany came while attending Mass and praying at her parish, St. Alphonsus Rodriguez in Woodstock, with her sister, who was visiting from out of town.

The two women ran into Bilenki.

“In all my years at St. Alphonsus, I had never seen her there,” Becker said.

“I was like, ‘Oh my gosh, I can’t believe you’re here,’” Bilenki recalled.

Becker took the chance meeting as “a guiding light.”

“It was somebody telling me that all would be OK,” she said. “That’s what I really believe happened.”

“I feel very strongly that God does actually put us in people’s paths who walk with us on our faith journeys,” Bilenki concurred, adding that she is grateful that her Catholic employer allows her to do so explicitly.

For Becker, many came to her aid, especially family, such as her sister, who forewent teaching summer school to be at her side.

Her pastor, Jesuit Father Joseph Lacey, “was constantly reaching out to me and comforting me,” she said.

“It was quite clear from the get-go that she trusted God to see her through,” Father Lacey said. “I was just amazed with her.”

If it sounds like Becker’s journey through potentially terminal cancer has been nothing but a sequence of joyous, comfort-filled moments, it hasn’t. Her unusual capacity for hope, however, leads her to emphasize the positive in retrospect.

“My message is to have hope, to not give up and to know happiness will come again in many different forms,” she said.

Kerry Becker, a parishioner of St. Alphonsus Rodriguez in Woodstock, and her husband Randy didn’t expect to add infant Jacob to a family that includes, from left, Joelle, 12, Lila, 10, and Ethan, 6. (Kevin J. Parks/CR Staff)

The final surprise, Jacob, an unlikely conception just months after Becker’s chemotherapy ended, has brought the most happiness of all.

“When he smiles, his face just lights up the whole room,” Becker said. “He enjoys every moment, and that’s what I’m trying to show my kids.”