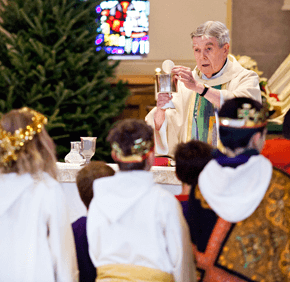 As he led the sacred rites, Monsignor Burke watched a 10-year-old boy hurl a Molotov cocktail into the dry-cleaning store across the street – unleashing another kind of smoke.

Riots had overtaken swaths of the city that April of 1968, and the streets surrounding Greenmount Avenue were among those hit hardest.

“The stores were burning down,” remembered Monsignor Burke, now pastor of St. Francis of Assisi, a few miles away in Northeast Baltimore.

St. Ann became a food distribution center for the surrounding community, with other parishes donating canned goods and supplies that were trucked into the city. By Wednesday of Holy Week, Monsignor Burke recalled, the violence had subsided – giving way to a “beautiful Easter Sunday.”

For Monsignor Burke, who served St. Ann for four years, witnessing the riots – and experiencing the conditions that helped enflame them – were formative.

He worked for change.

“The needs of the people were incredible,” he said, recalling a lack of job opportunities and quality education.

For the ensuing four-plus decades, Monsignor Burke put social justice at the center of his priesthood – raising money for community organizations as head of the local chapter of what is now known as the Catholic Campaign for Human Development. He also promoted the annual archdiocesan Social Ministry Convocation and was active in numerous community and neighborhood groups.

At 79, Monsignor Burke continues to promote social justice, although he acknowledged that he moves “a little more slowly.”

The pastor isn’t alone, as there are several other city priests who remain active in ministry past age 70, the age when they are eligible to retire.

One longtime pastor in West Baltimore was hospitalized at the beginning of January, and last year saw the death of Monsignor Damien Nalepa, pastor of St. Gregory the Great in West Baltimore and a stalwart of social justice.

A generation of priests is retiring or passing on – a generation inspired by the reforms of the Second Vatican Council and one that seemed particularly passionate about righting wrongs through social change.

Who will take their place?

Father Donald Sterling, longtime pastor of New All Saints in Liberty Heights and one of the first African-American priests ordained for the archdiocese, said social justice is about getting at the root causes of the conditions that cause poverty or inequities.

“The ultimate reality is that we are children of God, made in his image and likeness,” Father Sterling said. “Everyone deserves a right to a just, moral life and those necessary tools to live a certain quality of life. I see those as the underpinnings of what social justice is.”

As the Catechism of the Catholic Church puts it, “society ensures social justice by providing the conditions that allow associations and individuals to obtain their due.” That means fighting for just wages, opposing discrimination and, as articulated by Blessed Pope John Paul II, respecting the dignity of every human person.

If social justice is to thrive, Father Sterling believes empowering the laity is key.

“The laity should be involved in every level of church life,” the 64-year-old Baltimorean said. “The more involved church members are, the stronger your parishes are.”

At every social ministry convocation, Monsignor Burke said, of the 400 people who participate, only a handful are priests. Members of the laity are doing much of the hands-on work.

“One of the reasons they come is to be pumped up,” he said, “so they don’t go back to a place that’s indifferent or feel that no one is paying any attention.”

Lay people have been active in working for fair housing, living wages and an end to the death penalty. They support gun-buyback programs sponsored by the Catholic Review at St. Wenceslaus and St. Gregory. They also help those with addictions and work to encourage small business ownership and entrepreneurship in the city.

Through peace walks in a city where there were 217 murders last year – 20 more than in 2011 – many Catholics have also heeded the call of their bishops to pray for peace in their community.

Monsignor Burke said it’s difficult to tell whether the up-and-coming generation of priests is as interested in social justice as his was. Some, including Father Ty Hullinger of St. Anthony/Most Precious Blood, Father Patrick Carrion of the Catholic Community of South Baltimore and Father Patrick Besel of St. Mary of the Assumption, Govans, are taking up the mantle. But others have not come forward, Monsignor Burke said.

“Social justice shouldn’t ever be seen as something extra for a priest,” the pastor said. “It should be seen as part of the job description.”

Redemptorist Father Robert Wojtek, the 57-year-old pastor of Sacred Heart of Jesus/Sagrado Corazón de Jesús in Highlandtown and a leader in ministering to Hispanics in the city, worried that some younger priests haven’t received adequate seminary training in social justice – training that goes beyond social justice theory.

Seminarians have been assigned to his parish over the years, Father Wojtek said, and they often don’t have any conception of the injustices people face.

“They are wonderful guys,” Father Wojtek said, “but it’s really eye-opening when they come into the parish. You ask them about something like the DREAM Act and they don’t know what you are talking about.”

Father Wojtek suggested that the annual Hispanic Ministry Conference be held in the seminary so that future priests gain better insights into the plight of new immigrants.

“Sooner or later, they are going to be facing those realities,” he said. “It’s not just getting out there and ministering to those who seem to give you the most praise or the most money or the most whatever else to make you feel good.”

Although he recognizes that there is a clergy shortage, Father Sterling called it a “frustration” that there are not more diocesan priests working in the city.

“That says certain things that are not necessarily positive in terms of how city church life is perceived,” he said.

Of the more than 50 parishes and missions in the city, nearly half are staffed by religious order priests including Redemptorists, Josephites, Vincentians, Jesuits, Franciscans, Spiritans, Dominicans, Norbertines, Pallottines, Passionists and Missionaries of St. Paul.

Throughout the archdiocese, there are currently 140 active diocesan priests – a number that is projected to dip to 113 by 2020 and below 100 in 2025. That means the already-difficult task of assigning a shrinking number of priests will only get more difficult in the years ahead.

Monsignor James Hannon, archdiocesan director of clergy personnel, said he is “certainly interested in priests who feel called to ministry in the city – men whose particular gifts and talents would benefit the church’s presence in the city.”

“I would say that we also look to city parishes and clusters of parishes to participate in shaping their own future,” he said. “Bishop (Denis) Madden has been meeting with city pastors and with representatives of clusters to hear from them how they see the church’s presence in the city unfolding.”

Monsignor Hannon noted that social justice is not just a city concern.

“It’s an important part of the fabric of many parishes in the archdiocese,” he said. “I would note the good work that many of our parishes do on behalf of those in need – as a matter of seeking to be socially just.”

If a concern for social justice is to remain strong, Father Wojtek said, it may be necessary to think of it in a different light. The phrase “social justice” brings to mind notions of “rabble-rousing hippies,” the priest said. Social justice is about addressing present-day realities, he said.

“When we look at the makeup of the church in the United States and the makeup of the society we live in, we have to include everyone in this,” Father Wojtek explained. “We have to be more creative and look at who are the poor and the needy and how to respond to them.”

“Jesus spoke extensively about our responsibility to the poor and the sick, the outcast, the foreigner and the sinner,” said Father Lyons, who has supported the rights of relocated East Baltimore residents whose neighborhoods have undergone dramatic redevelopment in recent years. “Our Christian, Catholic mission calls us to the service of one another and the promotion of justice.”

Pastor made city a safer place