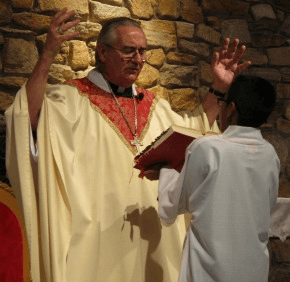 COCKEYSVILLE – There’s no way to verify it, but use of the words “shepherd” and “sheep” likely saw a substantial uptick June 4-6, during a visit to the Archdiocese of Baltimore by Bishop Luis Alberto Fernández Alara of the Diocese of Rafaela in Argentina.

Parishioners and archdiocesan staff alike used the words again and again to describe the bishop’s care for Father Daniel J. Varayoud, a priest of the Diocese of Rafaela who had been serving the Hispanic communities at St. Michael the Archangel in Overlea and St. Joseph in Cockeysville until December 2014, when he became ill with cancer. Father Varayoud, 56, is now hospital-bound and undergoing chemotherapy.

Comboni Missionary Sister Mercedes Castillo, archdiocesan director of Hispanic Ministry, said that parishioners of both St. Michael – where Father Varayoud stayed – and St. Joseph have been visiting him, bringing him food and taking care of his day-to-day needs such as laundry.

“He is experiencing the American culture of self-giving in a way that is profound,” added Father William Foley, director of pastoral care for retired priests in the archdiocesan Division of Clergy Personnel.

As translated by Sister Mercedes, Bishop Fernández said that Father Varayoud had originally come to Baltimore to “give answer to the call of Pope Francis, who is calling us to be a church that is able to go to the place that needs us most.”

As a former auxiliary bishop of Buenos Aires under then-Archbishop Jorge Mario Bergoglio, it’s safe to say that Bishop Fernández knows about “the call of Pope Francis.”

“I could see the process happening in (Father Varayoud),” Bishop Fernández said. “I saw his fear of the unknown at the beginning, and I see how he overcame it to embody what Pope Francis said.”

Parishioners of St. Michael the Archangel and St. Joseph tend to agree.

“He means so much to us,” said Paula Margarito, a member of the Hispanic Committee at St. Joseph.

“In the beginning when he came, we were so excited to have him,” she added, noting that Father Varayoud had provided the crucial service of celebrating Mass in Spanish.

Oscar Cordón, also a parishioner of St. Joseph, said that he made an effort to start a friendship with Father Varayoud a little more than a year ago.

“I have always been concerned that priests – and religious people in general – have many moments of loneliness,” Cordón said.

He added that though his parish was “shocked” by Father Varayoud’s illness, they have kept those lonely times to a minimum.

“People have been taking weekends and evenings to be at his side,” Cordón said, pointing to a fully reciprocal shepherd-sheep relationship between priest and parishioners, who include keeping tabs on Father Varayoud’s favorite soccer team, Club Atlético River Plate of Argentina, among their shepherdly duties.

While in Baltimore to support his priest, Bishop Fernández expressed gratitude to St. Michael the Archangel and St. Joseph by celebrating Spanish-language Masses June 4 and June 6, respectively, at the two parishes.

“He really is performing as the best example of a shepherd looking out for his sheep,” Cordón said.

“It’s a privilege having someone here who served the pope in the past,” commented Rony Ruano, another Hispanic Committee member at St. Joseph.

Bishop Fernández credited Pope Francis with teaching him “the way of building up the church through reciprocal dialogue.”

“Although he made the decisions,” Bishop Fernández explained through Sister Mercedes’ translation, “he was always asking us at meetings: ‘What do you think about this?’”

The former archbishop of Buenos Aires was known for walking the streets in simple clothing, and always having something in his pockets for the poor.

When he left, one beggar shouted, “Bergoglio, come back!” remembered Bishop Fernández.

Parishioners at St. Michael and St. Joseph were no doubt eager for such stories.

The bishop was touched by the warm welcome he received from both the parishioners and the priests of the archdiocese.

“He was so surprised,” Father Foley said, “but I told him that the priesthood is the greatest fraternity in the world – we’ve already been introduced by a mutual friend, Jesus Christ.”

Father Foley added that Father Varayoud is accepting all medical treatment “to allow himself to be given the chance to recover.”

“He came here with a mission, and he wants to finish it,” Father Foley said.

On June 19 at 8 p.m., St. Joseph, located at 100 Church Ln., Cockeysville, will hold a night of praise and adoration with musical group Alto Mando es el Señor, from El Salvador. The event will raise funds to support Father Varayoud’s treatment and offer prayers for his health. Tickets are $15; children under 10 are free. To purchase tickets, call Rony Ruano at 443-865-2411 or email Marimar Trejo at marimartrejo@hotmail.com.