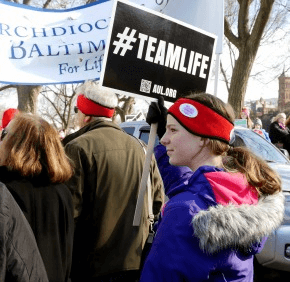 By Karen Osborne
Special to the Review
Cold or snowy, sunny or cloudy, the March for Life is still Maria Simpson’s “favorite day of the year.”
“Who doesn’t want to get pumped up with so many Catholic young people?” said the Towson University senior, a parishioner of Our Lady of the Fields in Millersville. Simpson attended her first March for Life at 7 years old with her family, and has been coming ever since.
“There’s so much hope everywhere. It gives me a lot of hope that my generation might be able to overcome the culture of death,” she said.
The 42nd annual March for Life was held Jan. 22, on the National Mall in Washington, D.C. The hundreds of marchers from the Archdiocese of Baltimore who attended came from all races and cultures, and ranged in age from babies less than 1 year old to elderly parishioners who made the walk with the aid of canes and wheelchairs. A large percentage of the marchers were teens, attending alongside their schoolmates and youth groups, while many other young people came with their families.

It is this “universal aspect” that attracted March for Life veteran Elizabeth Milihram from St. Mary in Hagerstown.
“We are witnessing for the cause of life,” she said. “This draws people from all over the country, and it has spawned marches all over the world. It’s beautiful — that we show we still care, and that we are not going away, and that we are committed to the cause of life.”
The March is “exciting,” according to Joey Hayden, 14, of St. Paul in Ellicott City. “It’s great to see how many people share your views and see how many people want the same thing for the world.
Marchers wound through the streets of Washington toward Capitol Hill, with people from all over the country chanting, singing and dancing. One bagpipe group played “Immaculate Mary” outside the National Archives; another played bongo drums in a celebratory mood.
It was Evelyn Wandell’s very first March for Life. The parishioner of St. Louis in Clarksville, promised herself that when she retired, she’d finally be able to march alongside thousands of others to support the pro-life cause she believed in. While she called the March itself inspiring, “I am mostly thrilled at seeing so many young people,” she said.
It’s giving me hope that we’re going to turn this tide.”
Also see:
It’s up to young people to ‘end the scourge of abortion,’ speaker says
Missouri girl, 10, comes to Washington to march
Baltimore archdiocese ready for March for Life
‘Biggest human rights rally’ returns for March for Life
PrevNext