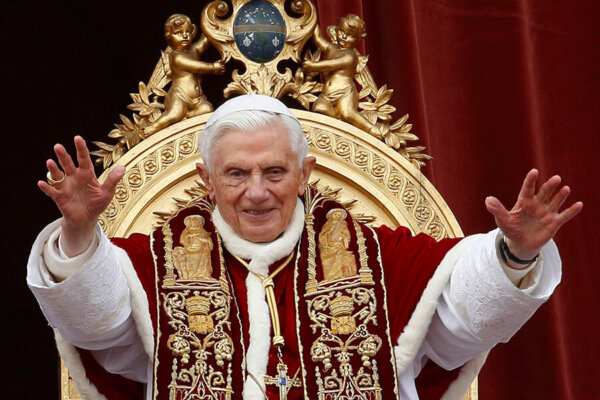 Pope Benedict XVI greets the crowd after delivering his Christmas message "urbi et orbi" (to the city and the world) from the central balcony of St. Peter's Basilica at the Vatican Dec. 25, 2012. (CNS photo/Paul Haring)

Dear Friends in Christ,
Early this morning we received word that His Holiness, Pope Emeritus Benedict XVI, went home to the Father’s house. We give thanks to the Father for the life, witness, and ministry of this “humble worker in the vineyard of the Lord.”

Pope Benedict was a man of deep faith and keen intellect who placed his considerable gifts at the service of Christ and his bride the Church. Early in his priesthood this took the form of scholarship and teaching. We are grateful for his contribution to the great work of the Second Vatican Council. He went on to serve as a bishop and later as Prefect for the Congregation of the Doctrine of the Faith. For eight years the Pope Emeritus served as Supreme Pontiff and since his humble decision to resign from the Petrine ministry, Pope Benedict’s service took the form of a life of prayer for the needs of the Church and especially for our current Holy Father, Pope Francis. Much more will be said about the Pope Emeritus’ life and legacy in the days to come but for now we remember all of the ways he has sought to build up the Body of Christ for which we are ever grateful.

As we remember Pope Emeritus Benedict’s life and commend his soul to the Lord, I would invite all the lay faithful, religious, and clergy of the Archdiocese of Baltimore to join me for a special Mass for the Deceased on Wednesday, Jan. 4 at 5:30 p.m. at the Cathedral of Mary Our Queen. Priests throughout the Archdiocese are warmly invited to concelebrate this Mass.

Finally, in your charity I would ask all the faithful of the Archdiocese to pray for the repose of the soul of Pope Emeritus Benedict by praying the Rosary or at least offering an Our Father, a Hail Mary, and a Glory Be. May the Master of the Harvest reward this humble worker in his vineyard.