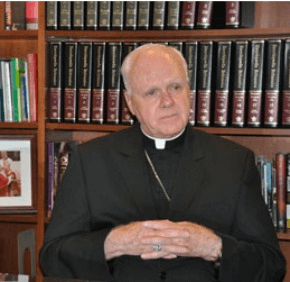 By George P. Matysek Jr.
gmatysek@CatholicReview.org
Sixty Catholic military chaplains were gathered in Washington for a professional day Sept. 11, 2001 when terrorists plowed airliners into the World Trade Center towers in New York and the Pentagon in Washington.
Archbishop Edwin F. O’Brien, then head of the Archdiocese for U.S. Military Services, remembered that as the military went into action, his chaplains were in high demand.
“They were getting messages from their commanders,” Archbishop O’Brien said. “‘We need our chaplains. Where is our chaplain?’”
Because transportation was limited in the middle of the crisis, it was difficult for the priests to get to the Pentagon and other locations. Within a day or two, however, the chaplains were back in the field – ministering to shocked and devastated victims, family members, emergency workers and military personnel.
“It was a busy time for our priests,” Archbishop O’Brien said, “and I think a wonderful indication of their effectiveness as pastors to their flock because the military kicked into high gear immediately and a lot of counseling had to be done – a lot of confessions heard, a lot of people returned to the church.”
Archbishop O’Brien joined his chaplains in watching a live television broadcast of the twin towers crumble collapse. As a New Yorker, Archbishop O’Brien said, “it had an extra punch.”
“I know priest friends (in New York),” he said. “Some of them had 30, 40, 50 funerals over the next couple of months.”
Video interview follows; Story continues below
Although the archbishop did not personally know any of the victims of the New York attack, he knew General Timothy J. Maude, the U.S. Army’s Deputy Chief of Staff for Personnel who was killed at the Pentagon.
“We lost one fine general,” Archbishop O’Brien recalled, remembering that Maude served as an extraordinary minister of holy Communion. “The plane hit right into the office.”
Ten years after the attacks, Archbishop O’Brien believes the nation has changed. There’s a greater awareness that evil exists, he said, and there are lessons that have been learned.
“I think the celebration of the anniversary is a good wake-up call that we have to keep our guard up and be strong both at home defenses and collaborating with our allies overseas,” Archbishop O’Brien said.
After the terrorist attacks, the archbishop said, “justice had to be done.” He is surprised, however, that U.S. forces are still present in Afghanistan.
“I hope it doesn’t last much longer,” he said. “I think we accomplished our mission of lowering the effectiveness of terrorists over there. Our challenge is local terrorists, too.”
Civil liberties must be protected, he said, “but (we) still (have to) be sure that we are tracking very closely anyone who is aiding and abetting terrorist cells anywhere.”
The archbishop cautioned that nothing justifies hating another human being. He emphasized that those who have plotted or are plotting terror – what he called “dastardly” – must still be brought to justice.
“That’s not in conflict with forgiveness,” he said.
Archbishop O’Brien called it a “pity” that some Muslims have experienced discrimination in the wake of 9/11. He has worked with people of the Islamic faith, he said, and believes they offer “a lot of lessons to teach us on warmth and hospitality and welcome.” He cautioned against generalizing against any religion, pointing to the horrors of the Second World War.
“My one regret is that a lot of the good Muslim leadership has not spoken out more strongly against the terrorists and would-be terrorists,” he said. “Maybe they have. I have just not heard their voices.”
Since coming to Baltimore in 2007, Archbishop O’Brien has encouraged parishes to display pictures of parishioners and relatives serving the nation overseas. He also asked them to pray for peace and to remember those “struggling and sacrificing greatly to maintain peace.”
“That’s what I think our military is – it’s a peace-keeping community,” he said. “No one wants peace more than they do.”
The archbishop called it a “shame” when lives are ended “tragically at the hands of evil people.”
“And that’s what did happen,” he said, “and we were brought to an awareness of the presence of evil in the world – the presence of sin, of hearts that can be so distorted as to take another human life.”
Archbishop O’Brien hopes that the value of human life – from conception until natural death – will be more respected.
“An incident like that, which took so many innocent lives, should remind us all that every life is sacred in God’s eyes from the very beginning,” he said.
PrevNext