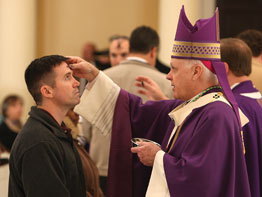 As Catholics throughout the Archdiocese of Baltimore began the Lenten season by receiving ashes on their foreheads on Ash Wednesday, Archbishop Edwin F. O’Brien encouraged them to receive the Sacrament of Reconciliation as well.

“Throughout our history, this has been a vehicle of Christ’s forgiveness,” Archbishop O’Brien said, speaking to the media Feb. 25 before he celebrated the 12:10 p.m. Ash Wednesday Mass at the Basilica of the National Shrine of the Assumption of the Blessed Virgin Mary in Baltimore.

The archbishop highlighted the archdiocese’s newly launched campaign promoting the Sacrament of Reconciliation, called “The Light is on for You.” Parishes throughout the archdiocese will be open from 7-8:30 p.m. every Wednesday of Lent for anyone who wants to receive the sacrament.

The archbishop said he was concerned that there is a sense of a loss of sin in the modern world.

“We see the problems we’re facing in the world today, in our own country, and – call them what you want – it’s greed, it’s sin,” he said.

Archbishop O’Brien encouraged those who have been away from the sacraments to come back to the church.

“I pray for them,” he said. “I pray that they will seize this opportunity to trust in God’s love and make use of all the gifts that God has given us for the church.”