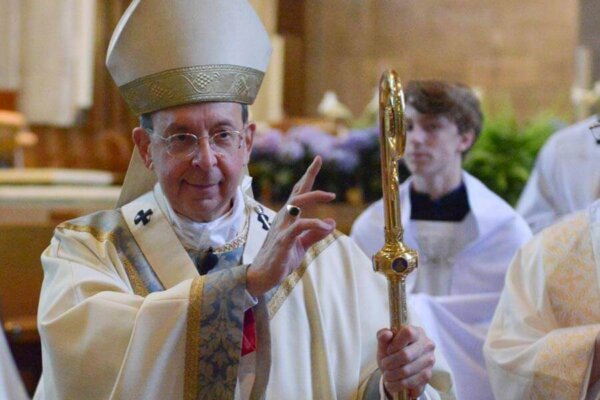 Mass at the Tomb of Count Galeazzi
Pontifical North American College
Officers of the Knights of Columbus
Feast of Elizabeth Ann Seton
January 4, 2023

We gather at the tomb of Count Galeazzi, whom we fondly remember as the architect of this Pontifical North American College, as a counselor to popes, as the Governor of Vatican City State, as an incomparable friend of the Knights of Columbus, and a counselor and friend to the Church in the United States. May God reward him for his labors, the fruits of which we continue to reap, even today. May he rest in the peace of Christ our Savior whom he served so faithfully.

We are also gathered here at the Pontifical North American College in these days when we mourn the passing of Pope Emeritus Benedict XVI. In this connection, I would like to recall the late Pope’s deep and abiding affection for seminarians and for priests. His teaching on the priesthood was at once beautiful and profound, and he lived the priesthood with life-long joy and fidelity. In 2010, on the 150th anniversary of the death of St. John Vianney, Pope Benedict declared “the Year of the Priest” to highlight the beauty of the priesthood and priestly virtue but also, as a way of expressing his love and support for his brother priests. One of my happiest memories is the pilgrimage of Knights of Columbus Chaplains for the Year of the Priest. We came here to Rome to take part in a vigil of prayer at which the Pope presided and at which he answered questions from priests around the world. And, of course, we gathered with the Holy Father for the celebration of Mass.

So too, he often told those who were discerning a priestly vocation not to be afraid to answer the call of the Lord – precisely what we see going on in today’s Gospel – and in God’s grace to strive for “integrity, maturity, asceticism, constancy & heroic fidelity.” His approach to seminarians was fatherly and loving and his writings continue to instruct and inspire new generations of priests – priests who are being formed for ministry here in the heart of the Church Universal.

Love for the Church in the United States

Just as Count Galeazzi befriended the Church in the United States, so too Pope Emeritus Benedict held it in high esteem. When he came to the United States in 2008, he highlighted Blessed Michael McGivney’s virtues in his beautiful homily at St. Patrick’s Cathedral, and later, at St. Joseph’s Seminary in Yonkers, he held up St. Elizabeth Ann Seton as a model of discipleship and sanctity, especially her abandonment to God and her confidence “that he is the final destination of every pilgrim” – the answer to Jesus’ question in today’s Gospel, “what are you looking for?” He added that she offered “an outstretched hand of hope to those she encountered along the way, often awakening in them a life of faith.”

So let us sum up these few reflections by commending Pope Emeritus Benedict to the Lord of life and love, even as commend Count Galeazzi. Let us give thanks for our first native born American Saint, Elizabeth Seton, even as we redouble our prayers for the canonization of our beloved Founder, who we pray may one day be the first American-born priest numbered among the saints. And let us pray for this Pontifical North American College, for its seminarians and faculty, and especially for its new Rector, Monsignor Powers. And may God bless us and keep us always in his love.