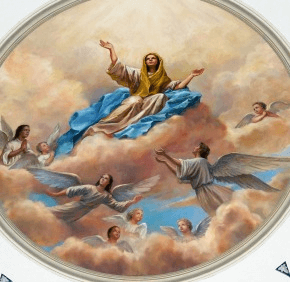 By Catholic Review Staff
While there is no requirement to attend Mass on the Solemnity of the Assumption of the Blessed Virgin Mary this year, the Archdiocese of Baltimore is still encouraging all those who can to come to Mass that day.
Archbishop William E. Lori will celebrate the 12:10 p.m. Mass at the Basilica of the National Shrine of the Assumption of the Blessed Virgin Mary in Baltimore Aug. 15.
Catholics are normally obligated to attend Mass on the Assumption, but are not required to do so when the feast falls on a Monday, as it does this year.
The solemnity commemorates Mary’s Assumption into heaven, body and soul, after her earthly life. An ancient belief of the church, the Assumption became an official doctrine of the church Nov. 1, 1950, when Pope Pius XVII defined it to be a dogma of faith. It was the only exercise of papal infallibility in the 20th century.
“Mary’s Assumption shows us our own destiny as God’s adoptive children and members of the body of Christ,” Pope Francis said in his homily on the Solemnity of the Assumption in 2014. “Like Mary, our mother, we are called to share fully in the Lord’s victory over sin and death, and to reign with him in his eternal kingdom.”
The Assumption is one of three holy days on which the obligation to attend Mass is lifted when it falls on a Saturday or Monday in the Archdiocese of Baltimore and in many other archdioceses and dioceses in the United States. The others are the Solemnity of Mary, Mother of God (Jan. 1) and the feast of All Saints (Nov. 1).

Catching up with the ‘Woodstock Nun’