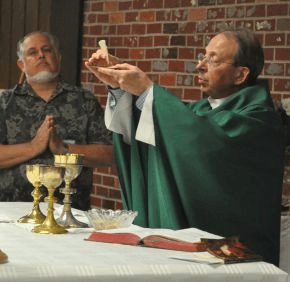 NEW ALBANY, Ind. – In the spring of 1965, Archbishop William E. Lori graduated from the eighth grade of Our Lady of Perpetual Help School here as part of a class of more than 50 students.

About half of them joined him July 18 in a Knights of Columbus hall in the southern Indiana town to celebrate the 50th anniversary of that graduation.

The reunion began with Archbishop Lori celebrating Mass with his classmates.

At the start of his homily, he noted that they had many blessings for which to be thankful.

“But one blessing that you should be especially grateful for tonight is this. Years ago, I gave up playing the violin,” said Archbishop Lori as he and his classmates shared a good laugh. “It was so bad that they wanted to change the zoning at our house to light industrial.”

Classmate Linda Loesch recalled the archbishop’s poor playing in front of their class.

“He was horrible,” she said with a laugh. “All of us kids were looking at each other, but we didn’t dare laugh.”

Archbishop Lori likely wasn’t laughing when he received a poor grade in religion class in the second grade.

During his homily, he recalled how his mother called his teacher, Mrs. Bach, to ask about the low mark, saying that she went over his catechism lessons with him every night.

“Little did I know that I would someday be living in the house where they invented the Baltimore Catechism,” said Archbishop Lori, referencing his Baltimore residence, which adjoins the Basilica of the National Shrine of the Assumption of the Blessed Virgin Mary.

He then recalled his teacher’s response to his mother.

“Without missing a beat, Mrs. Bach said, ‘Yeah, he knows it. But he doesn’t practice it. He’s just as bad as all the others,’ ” Archbishop Lori said. “I am sure that Mrs. Bach and Sister Mary William and Mrs. Richardson are all having a well-earned vacation and recess up in heaven … “

Archbishop Lori has traveled far from his boyhood home in New Albany in service to the church.

Susan Magness, 50 years after she graduated from the eighth grade with him, is still a member of Our Lady of Perpetual Help Parish and sent her two children to the parish’s school.

“I had such a good experience there,” she said. “I wanted them to have the same. And I think they did.”

Magness has also kept up with Archbishop Lori’s life of ordained ministry.

“It was nice to see him again,” she said. “He’s really accomplished a lot. We’re really proud of him.”

Classmate David Hock has kept in touch with Archbishop Lori over the years and visited him when he was bishop of the Diocese of Bridgeport, Conn.

He recalled how Archbishop Lori kept a photo from his 25th class reunion above his desk, alongside photos of him with St. John Paul II and Blessed Teresa of Kolkata.

“I was amazed,” Hock said. “In his heart, it meant something to him to the point that he would have it in his room so many years afterwards.”

Sean Gallagher is a staff reporter for The Criterion, which serves the Archdiocese of Indianapolis.

Lessons from South America: How to greet and understand Pope Francis