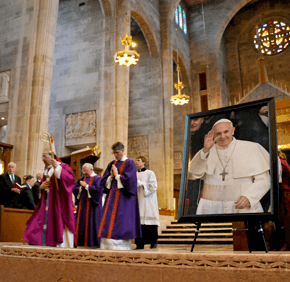 By Elizabeth Lowe
elowe@CatholicReview.org
Twitter: @ReviewLowe
Four days after the election of the former Cardinal Jorge Mario Bergoglio of Buenos Aires as the 266th pope, Oscar Comulada, a parishioner of Resurrection of Our Lord in Laurel and a native of Puerto Rico, was still thrilled by the reality of an Argentine pope.
“It represents me,” said Comulada, 69. “It was amazing.”
Comulada was among the hundreds who squeezed into the Cathedral of Mary Our Queen in Homeland March 17, when Archbishop William E. Lori celebrated a Mass of Thanksgiving for the election of Pope Francis.
The first Jesuit pope, Cardinal Bergoglio, 76, selected the name Pope Francis.
Since 1998, the Latin American pope has been archbishop of Buenos Aires, where he is known for his kinship for the poor.
Pope Francis is the 265th successor to Peter. His inaugural Mass is March 19, the Feast of St. Joseph, at St. Peter’s Basilica in Rome.
The liturgy at the cathedral included a procession of members of the Knights of Columbus, Catholic school students and about 240 seminarians, from both St. Mary’s Seminary and University in Roland Park and Mount St. Mary’s Seminary in Emmitsburg.
In addition, Maryland Gov. Martin J. O’Malley, a Catholic, and Catholic school presidents and principals were among those who packed the cathedral.
Concelebrants included Baltimore Auxiliary Bishops Denis J. Madden and Mitchell T. Rozanski; Monsignor Richard W. Woy, vicar general; Monsignor J. Bruce Jarboe, rector of the cathedral; Father Michael A. DeAscanis, vocations director for the archdiocese; and Paulist Father John Hurley, director of the archdiocese’s Department of Evangelization.
To view a slideshow, navigate the arrows below:
During his homily, Archbishop Lori said to the hundreds of faithful they “are gathered with the same vitality and the same joy (as those in Rome) to pray for Pope Francis as he begins his service as shepherd and pastor of the church throughout the world.”
Archbishop Lori spoke about the Holy Father’s “simple lifestyle, such as his taking the bus to work when he was the archbishop of Buenos Aires.”
“As archbishop of Buenos Aires, Cardinal Bergoglio was known simply as Father Jorge. He was known this way because he did the work of a priest. He served people directly, lovingly, whether it was ministering to the sick or visiting parishes or sitting in the back pew of his cathedral making himself available to all,” Archbishop Lori said.
In closing, the archbishop said “Pope Francis issued a call to conversion and reform. Let us offer Pope Francis our love and loyalty, first and foremost, by responding to the call for conversion. This is how we walk with our Holy Father, profess with him the name of Christ crucified, embrace with him the privacy of prayer, stand side-by-side with him in defense of human dignity, stoop down next to him in serving the poor and walk with him day-by-day in rebuilding the church.”
Felix Grue, a parishioner of St. Thomas Aquinas in Hampden, is pleased with the new pope.
“From what I see, he’s a very good man,” said Grue, 70. “I think he’ll be a good leader for us. I hope he sticks to his guns and sticks to the traditions.”
Libby Smith, a parishioner of St. Isaac Jogues in Carney, is “thrilled” Pope Francis is the new Holy Father.
“I’m real impressed by the fact that he’s so humble,” said Smith, 65. “Everybody seemed extra excited because he’s from one of the Americas. Maybe it will draw more people to practicing their faith.”
See also:
Cardinal O’Brien on Pope Francis: ‘A lot of good things coming’
Archbishop Lori celebrates Mass hours after announcement of new pope
Archbishop Lori impressed by new pope’s concern for poor
Copyright (c) March 18, 2013 CatholicReview.org
PrevNext