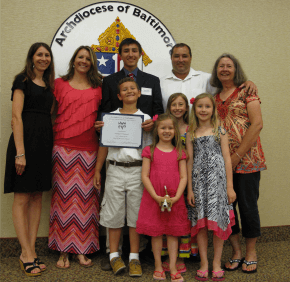 Reviewing the lector schedule for the Church of the Annunciation in Rosedale, 16-year-old Michael Witemore Jr. was mildly surprised to see that he was scheduled to read at 4 p.m. on June 20, a Saturday Mass.

When he dutifully arrived, he noticed members of his family filing into the pews.

“Then I knew something was up,” Witemore said.

At the Mass, Conventual Franciscan Father Justin Ratajcak announced that Witemore was one of 20 youths selected from Archdiocese of Baltimore parishes and high schools to receive the Eagle of the Cross award.

The honor was created by the National Federation of Catholic Youth Ministry for youths who exhibit special dedication and commitment in serving their peers and youth ministries.

Monsignor James Hannon, director of the archdiocesan Division of Clergy personnel, presided over a June 30 ceremony for the honorees.

“How we live our lives is an investment into that eternal life,” he said, “a life that’s available to us now, not in some distant future.”

Monsignor Hannon also read a letter from Archbishop William E. Lori, who was unable to attend.

“Your leaders and peers at your parishes and schools recognize in you what Pope Francis is calling all of us to be – missionary disciples,” the archbishop wrote. “Therefore, I look to you to help me in advancing the Gospel to a society that is in desperate need of truth and love.”

Witemore, according to those who know him, does just that through his generosity with his time and resources.

“He’s always looking to help people,” said his grandmother, Marlene Wankowski. “Even when he has extra money and happens to have kids in the car, he says, ‘OK, what do you want from McDonald’s?’ or Rita’s or the Royal Farms store.”

For Christmas, Witemore, a rising senior at Archbishop Curley High School in Baltimore, raised $2,322 for Toys for Tots.

“It was just something I had started the year before,” he said mildly. “I did a little bit of collecting at Curley and Annunciation.”

Witemore was also recognized for donating his Orioles memorabilia for a fund-raiser for disabled children. He said that, thanks to his friendship with several players, he is able to collect a large number of game-use and signed items.

“I always pull four or five items aside,” Witemore added, noting that the practice was inspired by the giving spirit of Conventual Franciscan Father Thomas Walsh, who served as pastor at Annunciation from 2009 until his sudden death at age 60 in 2012.

“When he first got to Annunciation, he was the new pastor and I was the little altar server,” recalled Witemore. “He was so welcoming, and always joked around about me becoming a friar.”

Witemore “dismissed it at first,” but is now “highly considering” entering the Franciscans, he said.

Other Eagle of the Cross honorees include Molly Martinez, nominated by St. Mary’s High School in Annapolis for her work as rector of the school’s Kairos retreat.

“Basically, we organize the retreat from the minute participants get there to the moment they leave,” she said, adding that she felt “so honored” to receive the Eagle of the Cross.

“It made me really happy and feel blessed,” Martinez said. “I’ve been at a great school and had the opportunity to strengthen my faith life, and this has been a great additional honor.”

Bridget Shepherd, a peer minister at St. Elizabeth Ann Seton in Crofton, was another honoree. She is known for encouraging younger parishioners to participate in youth group, and utilizing her personal transportation and driving ability to make that happen.

“I felt really honored,” Shepherd said of receiving the Eagle of the Cross.

This summer, she will be working on a service project in Gallup, New Mexico, with her friend, fellow St. Elizabeth Ann Seton parishioner and fellow Eagle of the Cross honoree Clare Logue.

Logue was nominated for her leadership in campus ministry at The Seton Keough High School.

Logue said that her reaction to winning the award was “pure joy,” but her mother’s was even more emphatic:

“She screamed in the middle of Mass,” Logue said.

Both Logue and Shepherd will begin classes at Mount St. Mary’s University in Emmitsburg in the fall.

Eagle of the Cross recipients, 2015

St. Pius X youth among those honored at Eagle of the Cross ceremony