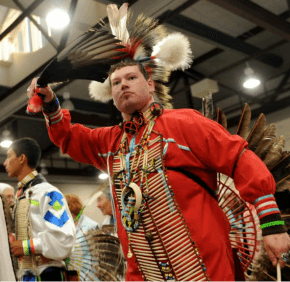 ALEXANDRIA, La. – More than 600 people from across the country gathered in Alexandria July 22-26 for the 76th annual Tekakwitha Conference in honor of St. Kateri Tekakwitha.

“St. Kateri Embraces the Wetlands” was the theme of this year’s conference, which was marked with prayer, song, dance and workshops. The conference was co-hosted by the Houma-Thibodaux and Alexandria dioceses.

Workshop topics included the call to evangelize, Native American martyrs, the power of prayer, how to read the Bible, Pope Francis and the environment and making a living on the bayou embracing the wetlands. Philadelphia Archbishop Charles J. Chaput, Bishop Shelton J. Fabre of Houma-Thibodaux and Bishop Ronald P. Herzog of Alexandria celebrated daily Masses during the conference.

During a general assembly session participants learned that Father Henry Sands, a priest from the Archdiocese of Detroit who is a member of the Ojibwe, Ottawa and Potawatomi tribes, will be the new executive director of the Black and Indian Mission Office in Washington, succeeding Father Wayne Paysse, executive director since 2007.

Father Sands, currently assistant director of Native American affairs for the U.S. Conference of Catholic Bishops’ Secretariat of Cultural Diversity in the Church, will assume his new role Sept. 1.

Sister Kateri Mitchell, executive director of the Tekakwitha Conference organization, presented a plaque to Father Paysse for his years of service. A priest of the New Orleans Archdiocese, he is returning home for a pastoral assignment there.

During the conference, Father Paysse presented Father David Korth, director of the St. Augustine Indian Mission School in Winnebago, Nebraska, with the Msgr. William H. Ketcham Service Award. The school is located on the Winnebago Indian Reservation in Nebraska and serves about 115 kindergarten through eighth-grade students from the Winnebago and Omaha tribes.

“I was shocked when Father Paysse announced the award because I thought he was just announcing that this will be my last conference,” says Father Korth, who will be taking another assignment in the Archdiocese of Omaha, Nebraska, next year. “It is a great honor and I was very pleasantly surprised. To receive an award named after Msgr. Ketcham is very humbling because I know he poured his heart and soul into serving Native Americans across this country;he paved the way for those of us who have followed.”

The priest said the award was emotional for him since it was his last conference and he “made a lot of friendships with Native Americans across the country” at the event.

Father Korth, who grew up on a farm in Nebraska, was given a Native American name by the Winnebago Tribe earlier this year, which he says is also very special to him. The English translation of that name is “man of faith.”

The award is presented to someone who offers meaningful service to the Native American Catholic community in the spirit of sacrifice and compassion;brings creativity and vision to the ministry; promotes faith formation opportunities, sponsors lay leadership training and witnesses a strong personal faith; reflects in his/her life an active concern for Native American heritage and the unity of the universal church; and collaborates with the Bureau of Catholic Indian Missions.

It is named after Msgr. William H. Ketcham who died in 1921 and was the third director of the Bureau of Catholic Indian Missions.

Next year’s Tekakwitha Conference will be held July 20-24 in San Mateo, California.