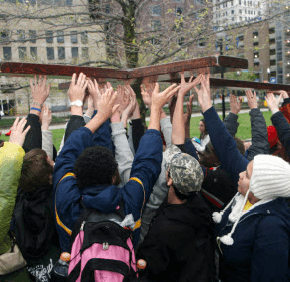 Archdiocese of Baltimore Catholic youths are joining an Occupy movement – not that one, though.

The Youth and Young Adult Pilgrimage, held annually on the Saturday before Palm Sunday in Baltimore City, will be held March 31 with the theme, “Occupy Passion/Manifestar Cristo.”

Scott Miller, the archdiocesan director for the Division of Youth and Young Adult Ministry, said Jesus’ willingness to enter into his passion was the inspiration.

“Jesus chose to ‘occupy’ his passion and young people are invited enter into the same as we begin holy Week with our annual pilgrimage,” Miller said.

“Not unlike those in the Occupy protests, we seek a different path, a new social contract,” Miller said. “We seek not to protest, however, we desire to profess our friendship and discipleship with Jesus.”

Georgina Vaca, coordinator for Hispanic young adult and youth ministry and the prime facilitator for the pilgrimage, said the passion is being incorporated in every pilgrimage activity.

“We have had young people and young adults included in the planning process from the very beginning and we anticipate that their enthusiasm and energy for this year’s pilgrimage will occupy a special place in the hearts of the participants,” Vaca said.

The pilgrimage, as always, is intended to commemorate Jesus’ entrance into Jerusalem at the beginning of Holy Week. Hundreds of youths walk. The event will start with the sacrament of reconciliation available on the grounds of St. Mary’s Spiritual Center and Historical Site on Paca Street at 11:15 a.m. A rally will follow an hour later, with the group then being spilt into two. One group will go to the Shrine of St. Alphonsus for a concert by the Jacob and Matthew Band.

Vaca said of the band, “We have seen them before at the National Catholic Youth Conference and the January Rally for Life, but this is their first time in the Premier See. And, they are special to us, too, because besides being national recording artist, they are also just simple parish youth ministers as well in their home parishes.”

The other group marching will carry a large wooden cross to the Basilica of the National Shrine of the Assumption of the Blessed Virgin Mary. The groups will switch sites afterward and then head to Baltimore’s War Memorial Plaza to pray the rosary.

As one group, the youths will then walk to St. Casimir in Canton for Mass with Cardinal Edwin F. O’Brien, the archdiocese’s apostolic administrator. This is expected to be his final Baltimore pilgrimage, as he will be leaving soon to take on his full-time role as the grand master of the Equestrian Order (Knights) of the Holy Sepulcher of Jerusalem in Rome. Since coming to Baltimore during the summer of 2007 as archbishop, Cardinal O’Brien has regularly participated in the pilgrimage and carried the cross.

“I think it will be bittersweet for all of us,” Miller said. “The cardinal has walked with young people at World Youth Days, these pilgrimages, and many other events. I’m sure the cardinal and the young people will miss each other as travelling companions in faith.”

Miller said young people can and will act on behalf of Catholicism if given the opportunity.

“There is a vibrancy found in young people and we, as church, need to find more and more opportunities to invite younger generations to ‘occupy’ our faith communities with their passions,” he said.