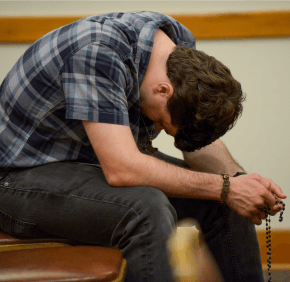 Eight young men, including two from Africa and two who have just graduated from high school, have been accepted into the priestly formation program of the Archdiocese of Baltimore.
The addition of the newcomers brings the total number of seminarians in the Baltimore archdiocese to 33 – slightly higher than the average class size of the last few years.
Ranging in age from 18 to 27, the new seminarians came of age during the pontificates of Pope Benedict XVI and Pope Francis. They are younger than last year’s crop of new seminarians, which included several men in their 50s.
Father James Sorra, vocations director for the Archdiocese of Baltimore, said the archdiocese has been reaching out to a wide variety of constituents to raise awareness about the call to religious life and the universal call to holiness.
“We are trying to foster a culture of invitation to all vocations,” said Father Sorra, who is assisted by Julia Vidmar, coordinator of the vocations office.
The presence of two Africans in this year’s class is the result of a newly launched partnership with the Diocese of Kumbo, Cameroon. Under the arrangement, the archdiocese of Baltimore and the Diocese of Kumbo will co-sponsor the two seminarians, who will study at St. Mary’s Seminary in Roland Park and take St. Philip Neri in Linthicum Heights as their sponsoring parish.
After their ordination to the priesthood, the Cameroonians will serve five years in the Baltimore archdiocese and then have the option of staying here or returning to Africa.
“They bring a wonderful spirituality and a deep sense of piety,” said Father Sorra, noting that the Baltimore archdiocese will cover the expenses of educating the Cameroonians.

Maurice Sunde, a 27-year-old native of Nkambe, told the Catholic Review in an email interview that preparing for the priesthood in the United States after beginning his education in Africa will give him the flexibility to adapt to the culture of whatever people he serves.
“I strongly believe that we all have unique gifts which gives each and every one a place to contribute to the growth of every community in which we find ourselves,” he said. “We are all raw materials God uses to continue building his kingdom here on earth.”
Kenneth Lukong, 25, who hails from Bamkika-ay, said he wants to become a priest because he has fallen in love with God.
In Baltimore, Lukong said, he hopes to embrace new ideas and experiences, “which together with my past experiences should make me a holistic individual in my quest to be a servant to the church at large.”
The majority of the locally recruited seminarians come from parishes in the central portion of the archdiocese: St. John in Westminster, St. Mary in Hagerstown, Our Lady of Mount Carmel in Thurmont, St. John in Frederick and Holy Family at Fort Detrick in Frederick.
Luke Koski, 22, who will study at Mount St. Mary’s Seminary in Emmitsburg, is a recent graduate of Towson University who had a dual major in psychology and philosophy.
Raised in St. Joseph in Fullerton, St. Isaac Jogues in Carney and Immaculate Conception in Towson, Koski initially thought of becoming a Christian Brother such as those who taught him at Calvert Hall College High School in Towson.
“They helped me develop a prayer life and see the joys of fraternity and the virtues of a holy life,” he said.

In college, Koski began attending daily Mass and several events sponsored by the archdiocesan vocations office. After completing a mission trip to Nicaragua and praying in adoration of the Blessed Sacrament, he spoke with his spiritual director and decided to apply to become a priest.
“If others are considering it, my advice is to try to find a few other people who are trying to live holy and virtuous lives and stay close to them,” Koski said. “Ask God what his will is for your life.”
Jacob Lyons, a parishioner of Our Lady of Mount Carmel in Thurmont, sees the seminary as the place to discern what God wants of him. The 18-year-old graduate of Delone Catholic High School in McSherrystown, Pa., had attended the Quo Vadis vocations camp for boys, sponsored by the archdiocese.
“The big thing that attracts me to the priesthood is the spirituality,” said Lyons, who will study at St. John Paul II Seminary near the campus of The Catholic University of America in Washington, where he will complete his college work before moving on to a major seminary.
In addition to Quo Vadis, Father Sorra noted that the vocations office offers a wide array of activities, including “Summer Mondays,” days when men considering the priesthood gather at the Newman Center at Towson University to pray, discuss the priesthood and enjoy conversations that often last into the wee hours.
Other initiatives include outreach to parishes and schools, monthly discernment days, discernment retreats, sporting events such as an upcoming canoe and camping pilgrimage to the National Shrine of the North American Martyrs in New York and a “highways and byways” program that brings Archbishop William E. Lori out to various homes and parishes to meet with those interested in religious life.
The archbishop regularly meets with leaders in the African-American and Spanish-speaking communities to attract more local men from those communities. Increased focus on working with youth ministers has been a priority. The Knights of Columbus have also offered their financial support to seminarians of the archdiocese.
Father Sorra said the archdiocese is open to developing more international partnerships and is currently speaking with a diocese in Mexico about developing a program similar to the one launched with Cameroon this year.
The vocations director strongly advised priests of the archdiocese to encourage their parishioners to consider the religious life. According to a recent survey of newly ordained priests across the country, conducted by the Center for Applied Research in the Apostolate, 71 percent of new priests listed the parish priest as the most encouraging person in their vocation.
“Nothing replicates the influence of a parish priest,” Father Sorra said.
For more information, visit the archdiocesan vocations page.