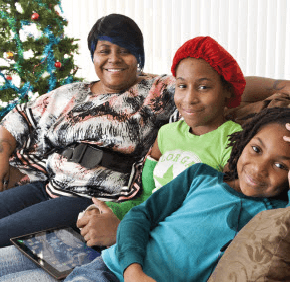 WINDSOR MILL – Housing was arranged, or so Aroura Brown thought, when she and a friend moved their families 800 miles from Milwaukee to Baltimore in March in search of better jobs.

Both single moms, they paid a landlord in advance for six months rent for adjoining row houses. With the promise of a new adventure, Brown put most of her belongings into storage in Wisconsin and took the Greyhound with her friend, their children and 21 boxes.

She had no idea how bad the adventure would be.

Brown, 37, and her daughters, ages 13 and 8, have lived in Sarah’s Hope, a shelter for homeless women and children in West Baltimore, since their second week in the city. After a series of setbacks, they were granted their Christmas wish – a home, right before the holidays, thanks to the help of St. Vincent de Paul of Baltimore.

Brown never expected to be homeless, she said. A veteran who served in the Amy and National Guard, Brown grew up in a military family in Connecticut. She married briefly, and later, after her marriage broke up, moved to California, and then Texas and Wisconsin.

Despite the challenges of being in the military and a single mom, she provided well for her family, she said. Her daughters had the latest electronics and toys. They spent weekends boating and exploring children’s museums, and contributed to charitable causes.

“They were accustomed to a whole different life,” Brown said.

Brown’s trouble started immediately after arriving in Baltimore. They took taxis to their rented houses, and it was immediately clear something was wrong. The sites were under construction; one house was missing a floor. They called their landlord, who told them work would be finished within a week. It wasn’t, and he never answered their calls again.

“I was destroyed at that point,” Brown recalled.

They stayed in a hotel at first, but money was tight. They learned of Sarah’s Hope, a St. Vincent de Paul program, and were admitted. Because her friend had four children, she was a priority for rapid rehousing. Brown’s family was not, and the weeks turned into months in the repurposed grade school on Mount Street. She and her daughters slept in an old classroom with six other families.

When planning the move, she expected to find work easily once in Baltimore, but it took several months. Without an income and with a glitch in the city’s Temporary Cash Assistance program, she had to let payments lapse at the Milwaukee and Baltimore storage facilities she was renting. She lost everything.

However, she never considered returning to Milwaukee, where she had rented a four-bedroom home, she said. She saw her situation as a test of the will.

“I’m going to be a soldier until I die,” she explained. “I can work though just about anything. I know me, and I know how determined I am. I knew it was only going to be temporary.”

On Aug. 22, Brown took a security job at The Walters Art Museum in Baltimore through the Mayor’s Office of Employment Development, which teamed with Sarah’s Hope and two other Baltimore shelters in a pilot program to place residents in jobs. She later connected with a U.S. Department of Veterans’ Affairs program that provides rent assistance. In November, she found her dream apartment.

Her family moved to Windsor Mill Dec. 14, making their new home in a two-bedroom, two-bathroom condo with a gas fireplace and balcony overlooking tennis courts.

“It is such an overwhelming joy to know that that family came into a shelter homeless, and they were able to get those barriers removed and move on toward self-sufficiency,” she said.