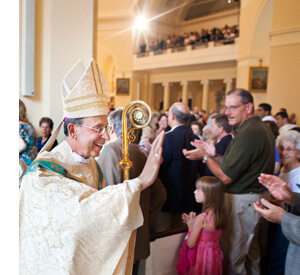 “The Second Vatican Council gave the world, ‘Dignitatis Humanae,’ a document that explains why religious freedom is important. First, it speaks agains government coercion. It makes an even more important point that the right to religious freedom has its foundation in the inherent dignity of each person; and that each person, endowed with reason and free will, is impelled by their nature and bound by a moral obligation to seek the Truth– especially the truth about religion.

Look at what is happening to Christians in the Middle East, which Pope Francis has called, ‘genocide.’ Look at the non-violent but increasing exclusion of religion from the public square closer to home. The Holy Father’s words, like those of his predecessors, continue to be shaped by, ‘Dignitatis Humanae.’ It is a documen