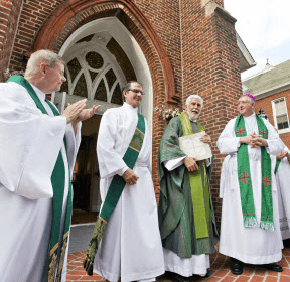 By Maria Wiering
mwiering@CatholicReview.org
Twitter: @ReviewWiering
Bishop Mitchell T. Rozanski, auxiliary bishop of Baltimore, blessed St. Michael’s new front plaza and renovated narthex June 22 following Mass. With the new – and much safer – staircase and ramp, “we have one of the nicest entrances on Main Street,” said Father Edward S. Hendricks, pastor of the Frostburg parish.
The plaza, which is nearly complete, includes new steps and railings, a wheelchair-accessible ramp, landscaping, lamp lights, new front doors and wrought iron fences, complementing the aesthetics of the historic church, built in 1868.
Before the project, “basically, people were falling down the steps,” Father Hendricks said. “No two steps were the same height, depth or width.”
The narthex renovation resulted in a brighter interior, with cleaned stained-glass windows, a new chandelier and exposed antique radiators.
Parishioners began fundraising for the $540,000 project five years ago, under St. Michael’s former pastor Monsignor James W. Hannon, now director of the Division of Clergy Personnel for Archdiocese of Baltimore.
“It’s just nice to officially bless it,” Father Hendricks said of the project, which he said makes the church more welcoming.
The new plaza accommodated the graves of city founders Meshach and Catherine Frost, who were buried in 1864 and 1876, respectively, on the property, the location of their first home. An obelisk marking their graves is in front of the church.
The Mass prior to the dedication celebrated the service of Camilla Rawe, who retired after 10 years as the religious education coordinator at St. Michael and St. Ann in Grantsville.
Bishop Rozanski celebrated a Mass June 23 at St. Patrick in Cumberland honoring Deacon Loren Mooney, who is also retiring from ministry after 17 years. St. Patrick is part of Our Lady of the Mountains parish, where Deacon Mooney served as the director of religious education.
Copyright (c) June 24, 2013 CatholicReview.org
PrevNext