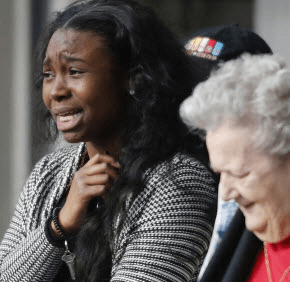 By Maria Wiering
mwiering@CatholicReview.org
COLUMBIA – Catholic Charities of Baltimore offered counseling services at St. John the Evangelist in Columbia Jan. 26, a day after a teenage gunman killed two employees at the nearby Columbia mall.
Six counselors were available during morning Masses, and a dozen were there Sunday evening during Mass and a youth group gathering.
Of those who sought counseling at St. John “there has not been, to our knowledge, someone who is very intimately connected to any of the victims,” said Anne Ober, a member of Catholic Charities’ Child and Family Services Critical Incident Stress Management (CISM) team.
However, Ober said, “many of the youth and families breakfast there or work in the mall, so they’re certainly affected by fear and anxiety.”
According to law enforcement officials, 19-year-old Darion Marcus Aguilar shot and killed Brianna Benlolo, 21, and Tyler Johnson, 25, employees of the skate shop Zumiez, and fired other shots at patrons before killing himself Jan. 25 around 11:15 a.m. Police have not identified a motive.

Darion Marcus Aguilar, 19, of College Park,, identified by police as the gunman in the Jan. 25 shooting at the Columbia mall in Maryland, is seen in an undated photo released by the Howard County Police Department Jan. 26. Speaking at a news conference, police could provide no immediate insight into why Aguilar killed a young man and a young woman at the mall just outside Baltimore, before apparently killing himself. (CNS photo/Howard County Police Department handout via Reuters)

St. John offered its regular 5:30 p.m. Mass for the victims, their families and friends. The Mass was held at the Wilde Lake Interfaith Center, one of two interfaith sites where the parish operates. With a half-mile separating them, the center is the closest Catholic worship space to The Mall in Columbia. About 300 people attended the Mass.
In his homily, Father Ferdinand Ezenwachi, an associate pastor of the parish who celebrated the Mass, emphasized 1 Corinthians 12, where St. Paul described the church as one body with many parts.
“That is why when something happens in society, we are all affected. We all worry,” he said. “When we face something like this, the only thing we can do is hand it over to God because we cannot explain it.”
Father Ezenwachi said that his prayer was that God would help people control their actions and avoid violence.
At the end of Mass, Ober addressed the congregation, asking if anyone had been at the mall during the shootings. A few hands went into the air. She urged them to speak to a counselor.
In addition to meeting with people individually, Catholic Charities’ team met with the youth group. About 60 youths were at the gathering, Ober said.
Most people who met with CISM team members wanted to share and process their reaction to the shootings, Ober said. The counselors are trained to identify people who need therapy beyond the counseling session.
CISM team members typically provide services for Catholic Charities and archdiocesan staff members, but respond to community crises when needed, Ober said.
Personnel from the Archdiocese of Baltimore were also at the parish Jan. 26 to assist parish staff. Ruth Puls, director of catechetical and pastoral formation, said that in tragedies, people reach out to their parish.
“That was really nice this morning, to see people coming in and hugging staff members and talking about where they were when they heard the news,” Puls said.
St. John’s pastor, Father Gerard Bowen, is vacationing out of the country but has been in contact with the parish.
Elyse Smith, 17, a peer minister in St. John’s youth group, said the Jan. 26 Mass was important because the shooting was “something that hit the whole community, and it hit so close to home.”
She added: “Having this parish means a lot to me because it’s something I can fall back on in times of trouble.”
St. John choir member Alexandra Aber, 24, said that when she heard news of the shooting, her thoughts immediately turned to the children whose parents take them to the mall on Saturday mornings. She was at the Wilde Lake Interfaith Center for a music workshop when it went on lockdown after the shootings because of its proximity to the Mall.
“Columbia is just not a place where that kind of thing ever happened in the past,” she said. “Columbia was such a utopian, idealistic place. We were living in a little bubble.”
Halfway between Baltimore and Washington, D.C., Columbia is a planned community that was established in 1967. Its founder, James Rouse, envisioned a city that would emphasize a high quality of life through its neighborhood-based design, diversity of residents and focus on nature.
Victoria Cofield-Aber, 62, Aber’s mother and chair of St. John’s diversity committee, said she felt like the shooting caused the community to lose its innocence.
“The only thing we can do is pray,” she said. “For me, it just strengthens my faith. It helps me understand that God is there, always. It could have been worse. It could have been a lot worse.”
Archbishop William E. Lori, in a Jan. 25 statement, offered his prayers and condolences for those affected.
“May this day of sorrow, during which we have witnessed but the latest act of senseless violence in our society, turn our hearts and minds anew to the dignity and value of every human life,” Archbishop Lori said. “May this day spur us on to work and pray for the day that, with every person respected and loved, we will be free from such violence and fear.”
Also see:
Immaculate Conception School has winning entry in BGE video contest
Young adults at helm of the fight for life
PrevNext