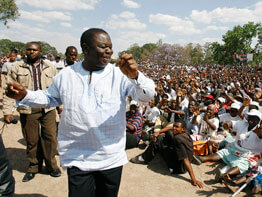 CAPE TOWN, South Africa – With Zimbabwe’s power-sharing deal in jeopardy, the country’s leaders are playing politics at the expense of the suffering majority, a church official said.

“Life here is extremely difficult,” especially in rural areas where some people are said to be surviving on wild fruit, said Alouis Chaumba, who heads the Catholic Commission for Justice and Peace in Zimbabwe.

Ordinary Zimbabweans’ hope that the power-sharing deal would improve their lives “has been dashed,” he told Catholic News Service in an Oct. 13 telephone interview from the capital, Harare.

The “greatest blunder” in the power-sharing deal, which aimed to give Robert Mugabe and the opposition equal power in a unity government, was that “Cabinet posts were not sorted out as part of the agreement,” Chaumba said.

The deal, signed in September by Mugabe and opposition leader Morgan Tsvangirai, said the opposition would hold 16 Cabinet seats and the ruling party 15. The rivals have yet to work out details of the new government, including which side would control which ministries.

President Mugabe has allocated all the security ministries to his ZANU-PF party. The opposition warned that the move could derail negotiations.

The ruling party “wants all the key ministries and it seems that they could be hoping that the opposition will pull out of the deal so they can go it alone,” Mr. Chaumba said.

Jesuit Father Oscar Wermter said that the 84-year-old Mugabe, who has ruled Zimbabwe for 28 years, “is still very much in charge” of the country.

“He is using Tsvangirai as window dressing so as to attract foreign funding,” said Father Wermter, who runs the order’s communications office in Harare, in a telephone interview Oct. 10.

Noting that “there is no real hope of change as long as Mugabe is still there,” he said that for substantial change there has to be “constitutional reform to restore a balance of powers.”

Zimbabwe has the world’s highest inflation rate of more than 231 million percent. It faces another poor farming season due to a lack of agricultural inputs, especially seeds and fertilizer.

Meanwhile, aid agencies say that more than 5 million Zimbabweans face starvation, two-thirds of the country’s children are out of school and water shortages have led to deadly cholera outbreaks in parts of the country.

The church in Zimbabwe has had to extend its food programs that were set up to help widows and orphans, Father Wermter said.

The local church relies on international Catholic aid agencies “to bring food into the country, because it just isn’t here,” he said, noting that particularly in rural areas “without intervention there will be mass starvation.”

“The ruling party is determined to stay in power and will not let go of any instrument of real power,” he said, noting that the party “has shown it will put ordinary people’s lives at risk to stay in power.”

Many Zimbabweans “use cross-border trading to survive,” Father Wermter said, calling that a “precarious existence.”

“Others have relatives working outside the country who send money home,” he said.

“The minority of people who work are not much better off, with low salaries and a cash crisis in the country,” he said.

“Cash is enormously restricted and people wait for hours in banks to get their own money,” Father Wermter said, noting that “everyone wants cash, and if you pay by check you are charged 10 times the price.”