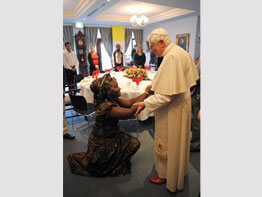 SYDNEY, Australia – The 12 young adults who shared lunch July 18 with Pope Benedict XVI also shared with him stories about their lives and their countries.

And they brought him gifts, including handicrafts from their home countries and three CDs of classical music.

Armando Cervantes, the 27-year-old director of youth and young adult ministry for the Diocese of Orange, Calif., presented the pope with a classic from the top tourist destination in his diocese – Disneyland.

The Mickey Mouse hat, featuring the famous character’s big ears, was inscribed “Benedict XVI,” Cervantes said, adding that the pope did not try it on, but he was smiling.

Cervantes also gave the pope a copy of the U.S. bishops’ Book of Blessings, photos from the pope’s April trip to the United States, a California Angels baseball and a little “stress ball.”

“The pope was squeezing it, but his assistants took the gifts away quickly,” Cervantes said.

The menu for the meal in the rectory of St. Mary’s Cathedral included sweet potato and pear soup; chicken, new potatoes and snow peas; and a lemon-and-passion-fruit-meringue pie.

Cervantes, chosen to represent North America at the papal table, said he managed to eat the meal pretty much without looking at it.

“I kept looking up to make sure it was all real and that he (the pope) hadn’t disappeared,” he said.

Cervantes said the 12 exchanged e-mail addresses and were planning on keeping in touch with each other through their pages on Facebook, a social networking Web site.

Ijeoma Jacinta Igwe, a 25-year-old Nigerian, was still so excited after lunch that she couldn’t seem to remember much of anything.

“He asked me so many things about young people and the church,” she said.

“I was very emotional and excited,” she said. “The joy I have today, I believe will be an endless joy. … I wished the moment would never end.”

The pope sat at the table between Jorgiana Lima de Santana, 26, of Brazil and Cho Wonhyong, 28, of South Korea.

The young Korean said sitting next to the pope was not nerve-wracking at all, “it was fantastic. He was very comfortable, so it was not a problem to eat. Everyone was joyful.”