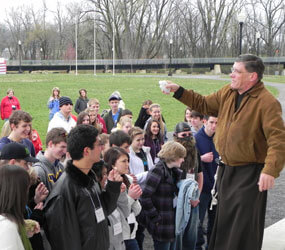 CUMBERLAND – Young Catholics from across Allegany and Garrett counties put their faith on display April 9.

The inaugural Cumberland Youth Pilgrimage brought together students preparing to be confirmed in May. Despite cloudy skies and chilly temperatures, their enthusiasm was apparent, as they followed a large wooden cross with smiles on their faces and concern in their hearts.

Students received a first-hand lesson on giving back to the community, as they visited facilities that help the less fortunate – including the Union Rescue Mission, Catholic Charities and the Family Crisis Resource Center. Students made donations of supplies and money.

“This event will help the students learn how they might help others and how they can give back to their community,” said Kathleen Broadwater, youth minister for the Mountain Maryland Youth Group.

While focusing on confirmation candidates, the pilgrimage was open to anyone.

“The turnout is great,” said David Smith, a teaching assistant at St. Ambrose in Cresaptown. “We have parishioners from other churches who decided to come out and join us today.”

“I’m impressed with the turnout; there are at least 150 here,” said Father Chervanak, who assists Monsignor James W. Hannon in six Mountain Maryland parishes. “The students realize their commitment as a confirmed Catholic means they have to look outside themselves and do service for others.”

The pilgrimage was promoted as a day of service, sharing, prayer and fellowship.

After the icebreaker, students separated into two groups, with each having a designated carrier of a large wooden cross that had been blessed by Father Chervanak. Stops along Cumberland’s outdoor open-air mall signified the Stations of the Cross.

“They’re not afraid or ashamed of the cross,” Father Chervanak said. “They walk the streets as Catholic Christians, seeing what people are doing to help the disadvantaged and homeless. … They want to make a statement about who they believe in, Jesus. I’m really proud of these kids.”

“It’s been great to explore Cumberland in a different way,” said Alexandra Miske, a parishioner of St. Peter, Oakland.

Daniel Taylor, executive director of the Union Rescue Mission, which shelters as many as 65, opened the eyes of many students when he noted an increase in homeless women with children.

“I think it’s good to get out in the community and meet people who are less fortunate than you,” said James Kirk, 14, a parishioner of St. Patrick, Cumberland. “It puts the whole confirmation process in perspective.”

Emma Baker, a 14-year-old parishioner of St. Joseph in Midland, found that the day helped her spiritual growth.

“It’s been a really good experience,” she said. “It has helped me make a better connection with God and helps my understanding of the next step, confirmation.”

Music for the pilgrimage was provided by Christian group, Music in the Moment. The event concluded with Mass at St. Peter, Cumberland.

Amid an economic slowdown and rising gas prices, a local pilgrimage proved to be an attractive option one week before a similar event in Baltimore.

The youth group from Bishop Walsh School in Cumberland was among those making a concerted effort to make a local event happen. Michele Brinsfield, a religion teacher at the school, believes a Cumberland pilgrimage can become an annual event.

“I think it has gone really well. We are already looking to build on it for the next time,” Brinsfield said.