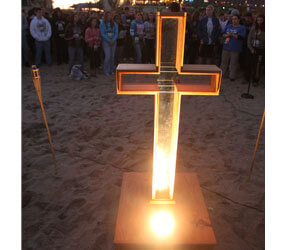 OCEAN CITY – The Archdiocese of Baltimore put out the evangelistic equivalent of the Bat-Signal, and nearly 500 teens contemplated that call as they looked to the Atlantic Ocean Nov. 20.

Moonlight splashed across the water as teens gathered on the sand behind the Clarion Resort Fontainebleau Hotel, where they were participating in the weekend-long Baltimore Youth Catholic Conference. The youths prayed decades of the rosary, hoping to be fearless in a fearful world.

Many from archdiocesan parishes and high schools said they were ready to accept the challenge laid down by organizers of the biennial conference known as BYCC and become Catholic heroes.

“One of the interesting things about being in these large groups in youth ministry,” said Josh Twery, a high school senior and parishioner of Sacred Heart in Glyndon, “is that you can come together in something we all understand and share a moment and praise God. It was cool.”

Participants were reminded via Mass, adoration of the Blessed Sacrament, keynote presentations and in workshops that saints were once people like them who became extraordinary disciples.

Trading cards handed out depicted saints like comic book superheroes. Scott Miller, director of the archdiocese’s office of Youth and Young Adult Ministry, hoped the weekend showed that saints can be emulated today.

“I do believe that we’ve introduced them to the possibility that saints and heroes don’t have to be somebody else, but could be them,” he said. “We’re saying, ‘you have within you the God-given abilities to be heroic, to be saintly.’ That’s the challenge for all of us no matter our age.”

If the teens are to be heroes, they need training, so they picked two of six workshops to attend.

Bob McCarty, president of the National Federation of Catholic Youth Ministry and a parishioner of St. Francis of Assisi in Fulton, presented on discipleship’s challenges. He said teens must show up, step up and step out.

“When we step up,” McCarty said, “our faith helps us deal with the hard times of life.”

One of the BYCC’s keynote presenters, Joia Farmer, sang “Sweet Child O’ Mine” and “Don’t Stop Believin’ “before sharing her journey toward self-worth and how the Catholic faith and her husband, Brad, completed her.

Brad, a member of the other keynote presenter, Catholic vaudeville duo APeX Ministries, encouraged the teens to “activate your superpowers,” from God. Partner Gene Monterastelli talked about the gift of grace.

“I challenge you to go forward with really open eyes,” Monterastelli said. “I want you to look for gifts and moments and demonstration of God’s grace and God’s glory.”

Father T. Austin Murphy Jr., the archdiocese’s director of vocations, shared during his homily in BYCC’s closing Mass that one of his heroes was St. Dismas. Crucified next to Jesus, he asked Christ to remember him in God’s kingdom. Jesus responded, “Today, you will be with me in paradise.”

“Dismas turned to Jesus and did not see simply a weak, suffering failure,” Father Murphy said. “He saw his new hero. It took the last moments of his life to recognize that, but that’s all he needed.”

“I always thought of saints as people that did everything right from the moment they were born until the moment they died,” Goodspeed said. “Now, I realize I could be a saint if I make all the right decisions and pull off a few miracles. I want to do everything I can to be the best person I can be.”

Emory Nelson, a junior at St. Frances Academy and a parishioner of St. Ambrose in Park Heights, finds inspiration in his grandmother.

“She’s generous and she’ll talk about her faith in a heartbeat,” Nelson said.

Father Murphy challenged the teens, saying: “Don’t let this just be a neat weekend. May this be a real transforming experience. May you never look at heroes in the same way again and may you all be the hero someone needs you to be, because they’re waiting for you, they’re looking to you and they want you to show them the way.

“Where do we turn for the strength to do that? We turn to a man naked, beaten, bruised, pierced, crucified and risen and present with us now.”

Miller said that if the teens ever waver in their saintly call, they can remember their night on the beach at BYCC.

“I think we re-defined ‘beach’ for them,” Miller said. “They will always think of the beach as a grace-filled experience. They have the rosary as an opportunity to celebrate that grace.”