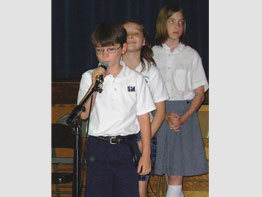 Fourth-grader Michael Ehart, 9, of St. Margaret School, Bel Air, spelled his way to the top of the Archdiocese of Baltimore and Houghton Mifflin Harcourt Spelling Bee May 16, becoming the youngest student ever to win the contest.

The pair went letter for letter with the best and brightest spellers from 40 Baltimore archdiocesan schools, the event in its 20th year.

Students in fourth through sixth grades who had won their schools’ spelling bees competed at the event held at St. Pius X School, Rodgers Forge.

“For many of our students who are gifted with the ability to spell, this is the only chance they have to share that talent,” said Leslie Andrathy, associate superintendent of curriculum and professional development for the Archdiocese of Baltimore. “Our students do so well that we have to start the competition with grade-six words.”

Spelling bee contestants nearly reached the end of the list of words during the more than three-hour contest.

“The list had only three words left when Michael won,” Ms. Andrathy said. The elusive second ‘e’ in the word irreplaceable decided the winner.

“What I liked best about the spelling bee was that it was challenging,” said the winner. “Plus, it was fun to learn new words when I was studying for it.”

Michael, Taryn, and Hannah each were awarded savings bonds and Houghton Mifflin Harcourt textbooks for their schools.