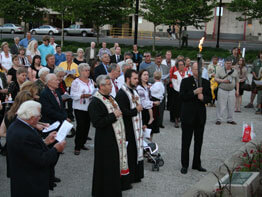 According to a 2007 article on the BBC Web site, the Kremlin confiscated grain from villages, with devastating results.

“No one is sure how many people died, but historians say that in under a year at least 3 million and possibly up to 10 million starved to death,” according to the article.