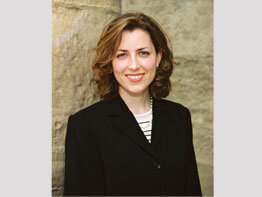 Just as enthusiastically as some of their parents rejected traditional morality and religion, many young people today are embracing Christian orthodoxy and ethics, according to Colleen Carroll Campbell.

Speaking at the third-and-final installment of the John Carroll lecture series, held June 9 at the Basilica of the National Shrine of the Assumption of the Blessed Virgin Mary in Baltimore, Ms. Campbell told an audience of about 300 that the “new faithful” are making their choice not out of fear, ignorance or nostalgia. They are looking to tradition because of “an intense and abiding hunger for God and a deep disillusionment with the God-substitutes of our post-modern culture,” she said.

“These new faithful crave experiential knowledge of God and an emotional connection to him,” said Ms. Campbell, author of “The New Faithful: Why Young Adults Are Embracing Christian Orthodoxy.”

“They hunger for sound doctrine and firm moral guidance,” she said. “They ask tough questions, and they expect serious answers.”

In researching her book, Ms. Campbell spent a year traveling across the United States and interviewing more than 500 young adult Christians – mostly Catholics and evangelical Protestants. Unlike stereotypes that portray them as “fundamentalists seeking a refuge from a world they fear or loathe,” Ms. Campbell said, “the new faithful tend to be highly educated and worldly wise.”

The young people she interviewed, born in the 1970s and 1980s, embrace biblical morality – which they define as adherence to the Ten Commandments, the Golden Rule, the Beatitudes, avoidance of pre-marital, extra-marital and homosexual sex, and commitment not only to Jesus but also to regular church attendance, Ms. Campbell said.

“The Catholics in this group strive to follow church teachings in their entirety,” she said, “rather than picking and choosing from among them.”

The new faithful base their morality on “truth claims” that they believe apply to everyone, Ms. Campbell said.

“That belief flies in the face of the moral relativism that so many of them were weaned on as children,” she explained.

Many in the younger generation grew up in a secular age that denied the existence of evil. Many came from broken homes and many of the Catholics lacked real religious formation, the speaker said.

“They were never urged to seek Jesus or avoid sin or carry the cross,” Ms. Campbell said. “They were simply told to be nice to each other, believe what suited them and never commit the cardinal sin of intolerance.”

The attraction to traditional religion is more than anecdotal, according to Ms. Campbell. A 2004 study by the Higher Education Research Institute at U.C.L.A. found that one-fifth of American college students are “highly religious.” The study also found that three in four college students say they pray, discuss religion or spirituality with their friends and find religion to be personally helpful.

A more recent survey conducted for MTV and the Associated Press last August showed that nearly half of teenagers and young adults said that religion and spirituality are either a very important or the single most important thing in their lives, with more than one in 10 reporting the latter, Ms. Campbell said.

Embracing traditional values has led to a spike in the number of young people who reject abortion. Ms. Campbell pointed to a New York Times/CBS News survey that found youth support for legalized abortion hit a new low in 2003, with less than four in 10 young Americans agreeing that abortion should remain generally available.

The young people Ms. Campbell interviewed were not content with a private and pietistic faith, she said. They want to use their faith to transform the culture.

“It’s very exciting for our church,” he said.