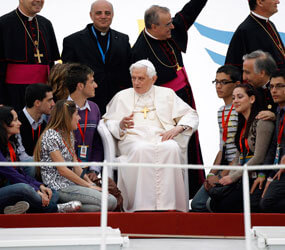 VALLETTA, Malta – In an unexpected display of honesty and frankness, five young Maltese men and women spoke to Pope Benedict XVI about their hopes, doubts and fears as well as the contradictions they sense within the Catholic Church.

Their testimonies were part of a music-filled and prayerful gathering of about 40,000 youth along the Valletta waterfront April 18.

The first young man on stage spoke on behalf of young people such as homosexuals, substance abusers, or children of broken or dysfunctional families who may feel marginalized by the church.

He told the pope “we should be treated with more compassion – without being judged – and with more love.”

Being shunned or looked down upon by some members of the Catholic community causes some young people to call God’s love into question, he said.

“How can we believe that God accepts us unconditionally when his own people reject us?” he asked.

Catholics who feel marginalized can experience great confusion and suffering especially when secular society seems more willing than the church to accept them and treat them with dignity, he said.

“Your Holiness, what must we do?” he asked, and the crowd applauded.

The next speaker, a young woman, spoke on behalf of Catholics who are active members of the church. She said faithful Catholics, “as a group, feel excluded by society.”

They work to keep Catholic teaching and values alive in society even though they know that “we are consciously estranging ourselves from our contemporary culture.”

She told the pope that it feels like “it is our faith itself that impedes us from entering further into dialogue with society.”

Sometimes efforts to build a better world, be at the service of others and bring people closer to God feel like “a fruitless exercise,” like an unfinished building that “is far too expensive to complete,” she said.

“We wish to leave our mark on the church even as we are young. Your Holiness, what must we do?” she asked.

The next to speak were a young man and woman preparing to be married within the church.

They said they want to have a marriage that is guided by God’s own spirit, and yet they are afraid “that life offers too many hurdles for us to live our married lives in God’s light.”

A major concern, they said, was trusting completely that God would provide for their family.

“We are not sure about our own interpretation of God’s providence: whether it is totally gratuitous or whether it is a form of compensation for our wisdom and prudence in raising our children,” the young woman said.

“Show us the way to live our married life as a calling from God. Your Holiness, tell us, what must we do?” they asked.

The last young person spoke on behalf of all the young men and women preparing for consecrated life.

He said God’s call to live one’s life completely for the Lord stirs up feelings of both happiness and despair. Those preparing for consecrated life are excited to be part of a community that is dedicated to building bridges with, not walls against, the modern world, he said.

However, he said, they are often not taken seriously by members of society, especially at a time when there is heightened attention to “priests who fail other persons.”

“It is our desire to grow closer to those who have distanced themselves from God, yet how are we to touch those hearts which are cold and suspicious?” he asked.

He told the pope that the church “should be prepared to make everybody welcome, to find a place for everyone who needs it,” and invite “new people to discover God.”

Yet it is hard to integrate into a society that seems to have no place for religious men and women, he said, adding “Your Holiness, what must we do?”

The pope did not answer each person’s concern individually, but he gave a general response in a text that was prepared before the event, but was based on the young people’s questions.

He said “every personal encounter with Jesus is an overwhelming experience of love.”

Even the hatred and anger St. Paul felt toward Christians before his conversion “was completely swept away by the power of Christ’s love,” he said.

Some of the harsh words found in the writings of St. Paul may make it hard to believe that the Gospel is spreading a message of love, he said, but love means being challenged to convert, to cleanse oneself of sin and to become more perfect.

“When (God) challenges us because something in our lives is displeasing to him, he is not rejecting us, but he is asking us to change and become more perfect.”

The pope said: “God rejects no one. And the church rejects no one.” However, because God loves his children so completely, “he wants us to purify ourselves of our faults and build up our virtues so that we can have life in abundance.”

He told the young people they should be proud that Malta “defends the unborn and promotes stable family life by saying no to abortion and divorce,” and he urged them to maintain a courageous witness to the sanctity of life and the centrality of marriage and family life in society.

He also encouraged young people to fulfill their duty to show God’s love through service to others, especially toward the most vulnerable and marginalized in society.

The world can learn from their Christian witness because “Gospel values are once again becoming countercultural, just as they were at the time of St. Paul,” he said.