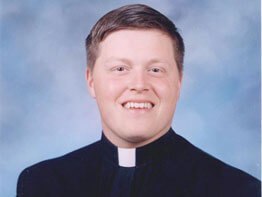 When Archbishop Edwin F. O’Brien concluded a special Jan. 25 Mass at St. Paul in Ellicott City, he announced to parishioners that it was time they receive a new pastor.

“There he is,” the archbishop declared as he pointed to Father Matthew Buening, St. Paul’s pastoral administrator since July 1.

“It was quite moving,” remembered Father Buening, who was overwhelmed by the warm response of the congregation. “It totally surprised me and it brought me to tears.”

The new pastor said he is overjoyed to serve at St Paul. The 1,100-family faith community is very committed to evangelization, he said, and that’s where much of his attention will be focused.

“We’re bursting at the seams in our religious education classes,” he said, noting that there are nearly 300 children enrolled in the program. “We want to make that the best it can possibly be and also make sure adults receive evangelization and then go out into the world.”

The parish has started a $1.8 million capital campaign to erect a new building that will house growing evangelization programs. The campaign will also help fund parking improvements and the demolition of an unused building, he said.

At 32, Father Buening is the youngest pastor in the Archdiocese of Baltimore. The priest said he will rely on the support of his parishioners and fellow clergymen of the region.

Father Buening grew up in St. John, Columbia, and St. Louis, Clarksville. He studied at St. Pius X Seminary in Scranton, Penn., and the Pontifical North American College in Rome. He was ordained in 2003 and served as associate pastor of Immaculate Conception in Towson and then St. John in Columbia.