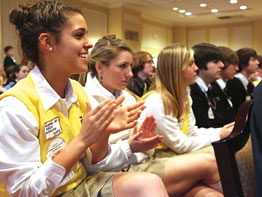 ANNAPOLIS – Standing on the marble floors of the State House just outside the House of Delegates chamber, 12-year-old Cameron Wood was still beaming after his first successful effort as a lobbyist. The seventh-grader from Our Lady of Victory School in Arbutus was one of 400 nonpublic school students who converged on Annapolis March 6 to ask their lawmakers to support nonpublic school students and teachers.

“I wanted to represent my school and make sure we receive the aid we deserve,” said Cameron, surveying the hundreds of other students clad in plaid uniform jumpers, dress shirts and ties, who scurried through the State House and state offices.

“It’s not fair to leave us out,” said the young parishioner of St. Ann in Baltimore. Cameron gave his state representatives a packet of information about legislation affecting nonpublic schools and witnessed the General Assembly in session.

The education gathering was part of the third-annual nonpublic schools legislative reception. The students, representing Catholic, religious and other nonpublic school communities, urged lawmakers to retain $3.6 million in the budget for textbook and technology in nonpublic schools. They also urged passage of legislation to extend the existing Quality Teacher Incentive Tax Credit to nonpublic-school teachers.

The advocates were especially vocal about passing the BOAST Maryland Tax Credit (Building Opportunities for All Students and Teachers in Maryland). BOAST would allow businesses to claim a 75 percent state income tax credit for donations to organizations that support public- and nonpublic-school students and teachers.

After visiting their lawmakers, participants shared lunch with senators and delegates.

Sen. James DeGrange, a Democrat representing Anne Arundel County, said it will be a challenge to pass BOAST but it can be done.

“Our fiscal situation is not that good, but I think we can do something on it,” said Sen. DeGrange, lead sponsor of Senate legislation to establish BOAST. “We’re all one big family. We want opportunities for the private schools and the public schools.”

Del. James Proctor, a Democrat representing Calvert and Prince George’s counties, pointed out that there are 74 co-sponsors of House legislation to establish BOAST. It only takes 71 votes to pass or defeat a bill, he said.

“I want to see every child learn,” said Del. Proctor, lead sponsor of the bill in the House. “It’s an obligation we have to our children.”

Mary Ellen Russell, deputy director for education and family life with the Maryland Catholic Conference, said nonpublic schools save Maryland taxpayers $1.5 billion in per-pupil expenditures. There are about 136,000 students who attend nonpublic schools in Maryland, she said.

In a written statement, Senate President Thomas V. “Mike” Miller Jr., a Democrat representing Calvert and Prince George’s counties, said one of the main goals of a state tax credit should be to encourage new practices that benefit the state’s citizens and economic development.

“There’s no doubt that the BOAST Maryland Tax Credit meets that goal,” he said. “We offer tax credits for many different enterprises: the film industry, research and development and businesses that create new jobs. Nothing is more worthy of our support than investing our state’s students and teachers.”