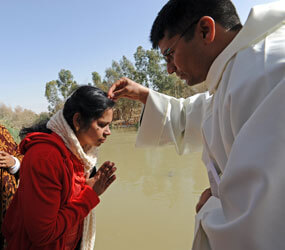 QASR EL-YEHUD, West Bank – With 8-year-old grandson Jamal in tow, Hajeh Mattar made her way across a wooden platform alongside the Jordan River. Her plan: to baptize him in the waters of the river at the traditional site of Jesus’ baptism.

Jamal’s father, Awad, his mother, Manal, and his sister Justine, 6, followed not far behind. For Hajeh, 65, it was the opportunity to fulfill a promise she had made at the site almost a decade ago when she prayed to God to see grandchildren from her son Awad, now 35.

It was her way to observe the feast of the Baptism of the Lord Jan. 8 along with hundreds of Catholic and Orthodox pilgrims who made their way to the site.

Awad was able to persuade his reluctant son to squat by the river as his grandmother cupped her hand into the cold water and poured it over his head and face.

Hajeh also made sure the children’s legs were dipped into the river before she was satisfied her promise had been kept.

“I hope they will have a good life with lots of success and are happy,” said Manal. “I hope God will protect them.”

Nearby, a Mass celebrated by the custos of the Holy Land, Franciscan Father Pierbattista Pizzaballa, gave parents the opportunity to baptize their children by splashing water on their heads and dipping their hands and toes in the river. Adults renewed their baptismal vows by stepping into the river.

In May, the site was reopened to the public after 11 years of planning and coordination with government officials. Until then, pilgrims were allowed at the site only three times a year, under special arrangements with the military because of the site’s proximity to Jordan – 330 feet across the river – and the presence of land mines left over from a period when terrorists attempted to infiltrate the border.

Rania Basir, 36, a Palestinian from Jerusalem studying in Cairo, filled empty bottles with water from the river. One would be given to a Coptic Catholic friend in Cairo whose relative has fallen ill and asked for the holy water, she said.

Greek Orthodox pilgrims, many clad in white robes, streamed down to the river as the Catholic liturgy continued. Despite the coldness of the water, they waded waist-deep into the river where some Greek Orthodox priests dunked their heads under water three times and blessed them.

A group of Catholic pilgrims from Croatia lined up quietly on the banks as their spiritual leader, Father Tomislav Planinic, blessed them with water from the river. Palestinians joined the line to be blessed as well. Twenty-month-old Andrei Gariseh of the West Bank village of Beit Sahour, held by his father Elias Geriseh, began to cry as the priest sprinkled water on his head.

“For us it is a good sign that he cried,” explained his uncle, Ashraf Geriseh. “When he cries it means something has changed, he has become awakened and aware in a different way.”

Jerusalem resident Mary Mishriki, 40, said that when her 18-month-old son Khamis, who was baptized for the second time at the Mass, gets older she will tell him about his baptismal renewal at the Jordan River.

“I wanted him to have a special baptism like Jesus,” she said, brushing away long curls from the face of the toddler who was regally dressed in white pants, shirt, a silver sequined bow-tie, a fluff-trimmed cape embroidered with silver sequins and white satin cap with a white feather and silver sequins. “Maybe it will bring him happiness in his life.”