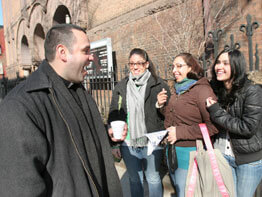 WASHINGTON – Although many young adult Catholics are interested in church ministry they find it difficult to connect their career plans or talents with available ministries, according to a survey released this year.

The survey, “Young Adult Catholics and Their Future in Ministry,” was commissioned by the Emerging Models of Pastoral Leadership Project, a joint project involving six national Catholic organizations and funded by the Lilly Endowment Inc.

A preliminary report on the survey of young adult Catholics will be the topic of an upcoming National Ministry Summit April 20-23 in Orlando, Fla. The summit, initially planned for 1,000 participants, recently was expanded to accommodate all who wish to attend.

“The waiting list kept growing,” said Christopher Atkins, executive director for the National Association for Lay Ministry, one of the sponsoring groups of the project. He said the interest in discussing the survey’s results shows that it “struck a chord with the people who minister and those who plan for future ministry in the Catholic Church.”

The nationwide online survey of young adult Catholics was conducted by sociologist Dean Hoge of The Catholic University of America’s Life Cycle Institute and Marti Jewell, director of the Emerging Models of Pastoral Leadership Project. Approximately 1,300 survey respondents were either involved in campus ministry programs or parish young adult ministries. The full survey will be published by Loyola Press later this year.

Most of the respondents said they view lay ministry as a call from God. More than a third of college students expressed interest in such service, and more than half of active young adults in the workforce expressed the same interest. Nearly half of the young men surveyed and more than a third of the women said they have at one time seriously considered ministry as a priest or religious.

“It’s time for us to engage these young people and find out how we can get them on board,” said Bishop Blase J. Cupich of Rapid City, S.D., episcopal adviser for the Emerging Models project.

“We are heartened at their level of interest, and we need to find ways to translate this attraction into active ministry that our church urgently needs,” he added.

The survey set out to learn more about the next generation of church ministers by looking at factors that both determine and deter their involvement in ministry.

Respondents said they were responsive to the concepts of answering God’s call, helping others and passing on the faith. Deterrents to ministry included other career plans and not realizing their own talents for ministry, low wages for lay ministry work and celibacy for those considering vowed vocations.

Many young adults in the survey – nearly half of the men and nearly 40 percent of the women – said they have seriously considered the priesthood or religious life. Following other career paths and a desire for marriage were most often cited as the primary reasons not to pursue ordination.

When asked if guidelines could be changed for those pursuing the priesthood, religious life or deaconate, respondents did not change their opinion.

For example, young women in the survey did not show great interest in becoming priests if they could. Nearly a quarter of the young men said they would find the priesthood more inviting if celibacy were not mandatory, but many did not have an opinion about it. The required lifelong commitment also did not appear to be a deterrent. The diaconate was of interest, but viewed as an option for later in life.

More than half of the respondents said the church needs to move faster to empower laypeople in ministry.

The young adult Catholics who were surveyed said they want pastoral leaders to more actively engage them in the life of the church and said they also would like a more solid catechetical foundation. Some called for more traditional practices in the church while others wanted the church to relate more to modern life and their personal experience.

“Underneath the differences, these young adults show deep care for their faith and an interest in the future of the church,” said Jewell, director of the Emerging Models project.

“Our next task is to find ways to engage them in a church for which discipleship is central and their involvement is crucial,” she said. “The young adults in this study have given us some interesting ideas to think about, and point to further questions and study. It is an area of concern that affects us all.”

The survey report, “Young Adult Catholics and Their Future in Ministry: Interim Report on the 2007 Survey of the Next Generation of Pastoral Leaders,” contains some of the main results of the survey conducted for the Emerging Models project. It is available online at www.emergingmodels.org; the site also has information on the National Ministry Summit.