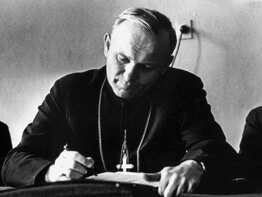 NEW YORK – Playwrights Tom Stoppard and Harold Pinter needn’t worry about their names being usurped in posterity’s annals by Karol Wojtyla, the archbishop of Krakow, Poland, who became Pope John Paul II. But there is much to admire in the late pope’s drama, “The Jeweler’s Shop,” currently on view in New York, courtesy of the Storm Theatre, the first in an ambitious and praiseworthy series of all his major works.

The 1960 play is probably the best-known title (if any can truly be considered well-known) of the former actor’s theatrical work. There was a movie with Burt Lancaster and Olivia Hussey in 1988.

On stage, in Boleslaw Taborski’s translation of the original Polish, the definition of “play” is stretched to the limit. The playwright himself slyly subtitled it “A Meditation on the Sacrament of Matrimony, Passing on Occasion Into a Drama” when it was first published, as if to acknowledge the lack of dramatic incident. Still, it’s a fascinating piece.

In the first of three acts, Andrew (Kristopher Kling) proposes to Teresa (Elizabeth Wirth), and they stand transfixed before the titular shop window (the unseen jeweler being a God figure), ruminating on their union and future as exemplified by the rings. In the second, unhappy wife Anna (Karen Eke) bemoans the sorry state of her marriage to the distant Stefan (Anthony Russo) and concerned Adam (Peter Dobbins) counsels the unhappy woman who might be contemplating infidelity. And finally the son of the first couple, Christopher (Chris Keveny), and Monica (Lara Theodos), the daughter of the second, proclaim their love, despite the latter’s dysfunctional childhood and the former’s insecurities about growing up without a father, who was killed in the war. The play ends on a conciliatory note for Anna and Stefan.

The problem is that there’s very little interaction among the characters. Perhaps this was the style of the Rhapsodic Theater, of which the young dramatist was a founder. Nearly all the dialogue is in the form of inner monologue. The second act is particularly obtuse, with allegorical allusions to the wise and foolish virgins, and Anna waiting for a “bridegroom” who ultimately appears bearing the dreaded face of Stefan.

In any case, the author seems most concerned with setting forth his ideas on the nature of love and marriage, and the role of ego as a hindrance to true love, insights later expanded in his theology of the body.

Wirth is outstanding among a cast that succeeds to a remarkable degree in speaking the impossibly poetic dialogue with naturalistic cadences, but she plays with particular sincerity. So, too, production elements are simple but first-rate, including Mr. Dobbins’ and Robert W. McMaster’s sensitive joint staging, Todd Ivins’ workable set, Michael Abrams’ atmospheric lighting, Jennifer Lustig’s period costumes (spanning the 1930s through the ‘60s), and sound designer Scott O’Brien’s occasional background music.

Next up is the 1949 play, “Our God’s Brother” (June 1-17) about Albertine Brother Adam Chmielowski (aka Brother Albert), a freedom fighter and painter canonized in 1989. In the fall, there are promised readings of “Jeremiah,” “Job,” “Reflections on Fatherhood” and “Radiation of Fatherhood.”

This worthy festival demonstrates that even after his early acting days Pope John Paul remained a true man of the theater. Despite talkiness, the work’s insights into humanity ring unerringly true. And though technically off-Broadway, the Times Square locale puts the late pontiff practically on the Great White Way, an extraordinary circumstance that would no doubt please him.

Forbes is director of the Office for Film & Broadcasting of the U.S. Conference of Catholic Bishops. More reviews are available online at www.usccb.org/movies.