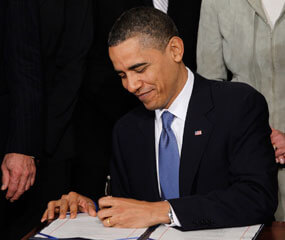 WASHINGTON – 2010 will be known in many circles as the year of health reform. Among Catholics, it might also be known as the year that caused, as Chicago Cardinal Francis E. George said in his final talk as president of the U.S. Conference of Catholic Bishops, a “wound to the church’s unity.”

Leaders of the USCCB clashed with the head of the Catholic Health Association and the superiors of many U.S. orders of women religious over whether the Patient Protection and Affordable Care Act and the executive order signed by President Barack Obama would permit the federal funding of abortion, force some people to pay for the abortions of others through their health insurance or violate the conscience rights of Catholic health providers and institutions.

Proponents of both views remain convinced that their stand was the right one.

In a Nov. 15 address to his fellow bishops, Cardinal George said “developments since the passage of the legislation” have confirmed that “our analysis of what the law itself says was correct and our moral judgments are secure.” He did not specify what those developments were.

In a Nov. 23 talk at the University of San Francisco, Sister Carol Keehan, a Daughter of Charity who is CHA president and CEO, said that although the health reform legislation was “not necessarily a perfect” law, she was convinced it would not fund abortion.

“As far as I was concerned, if I knew in my heart that it did not fund abortion, I could not do anything but stand up for the passage of that bill for the 32 million” uninsured people expected to receive health insurance through the reforms, she said.

“We believe at CHA that we have stood for life,” Sister Carol added. “We will continue to implement this for the good of life and the good of the American people.”

Since Obama signed the health reform bill into law March 23, only a few of its provisions have taken effect. Most of these affect relatively small groups – adult children now allowed to remain on their parents’ health insurance until age 26, retirees too young for Medicare, those with pre-existing conditions who change health plans and Medicare recipients with high prescription drug costs, for example.

Implementation of the legislation is to continue through 2014, as will debate on its likely effects.

Health reform clearly played a role in the results of the November elections, and some new members of Congress have pledged to seek its repeal.

The U.S. bishops – who have supported some kind of health reform for decades – have not backed the repeal calls but have supported two pieces of proposed legislation that they believe could fix some of the problems: the Protect Life Act and the No Taxpayer Funding for Abortion Act.

Introduced in April by Rep. Joe Pitts, R-Pa., and 125 co-sponsors, the Protect Life Act would amend the health reform law to stipulate that “no funds … may be used to pay for any abortion or to cover any part of the costs of any health plan that includes coverage of abortion, received credits or cost-sharing reductions.” It also would strengthen conscience protections for health providers, institutions and insurers.

The latter legislation, introduced in July by Rep. Chris Smith, R-N.J., and Rep. Dan Lipinski, D-Ill., with 185 co-sponsors, would apply more broadly to all federal funding. It states that “no funds authorized or appropriated by federal law, and none of the funds in any trust fund to which funds are authorized or appropriated by federal law, shall be expended for any abortion.”

Although neither bill is likely to receive consideration this year, Pitts, Smith and Lipinski were all re-elected to Congress, along with many more House members who are considered pro-life than there were in the 111th Congress.

“The health care bill made it clear that the current way we prevent taxpayer funding of abortion through annual riders is dangerously fragile,” Lipinski said in introducing the No Taxpayer Funding for Abortion Act. “To guarantee that taxpayers are never forced to pay for abortions and the innocent unborn are protected, we must make the long-standing ban on federal funding for abortion permanent and governmentwide.”

Contributing to this story was Valerie Schmalz in San Francisco.