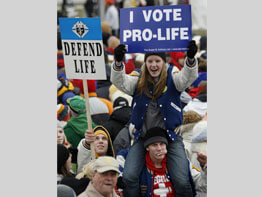 WASHINGTON – In the year marking the 40th anniversary of “Humanae Vitae,” Pope Paul VI’s encyclical on human life and birth control, discussion of bioethical issues was relatively muted, but 2009 is not expected to follow suit.

The year began with high hopes that discoveries by research teams in Japan and the United States in November 2007 would make stem-cell research involving the destruction of human embryos obsolete. The teams found that human skin cells could be reprogrammed to work as effectively as embryonic stem cells, thus negating the need to destroy embryos in the name of science.

But the findings seemed to have little effect on those already committed to embryonic stem-cell research.

Despite a concerted campaign by the Catholic Church and others in the state to oppose it, Michigan voters approved a ballot question expanding state funding of embryo-destroying stem-cell research.

And the two major U.S. political parties each nominated candidates for president who pledged to lift the ban on federal funding of embryonic stem-cell research. President-elect Barack Obama was expected to make more funds available for such research soon after his Jan. 20 inauguration.

Midway through the year, at their June meeting in Orlando, Fla., the U.S. bishops approved a new document calling the use of human embryos in stem-cell research “gravely immoral” and unnecessary.

“While human life is threatened in many ways in our society, the destruction of human embryos for stem-cell research confronts us with an issue of respect for life in a stark new way,” said the seven-page policy statement.

As the year drew to a close, the Vatican Congregation for the Doctrine of the Faith issued an instruction warning that certain recent developments in stem-cell research, gene therapy and embryonic experimentation violate moral principles and reflect an attempt by man to “take the place of his Creator.”

The latest advances raise serious questions of moral complicity for researchers and other biotech professionals, who have a duty to refuse to use biological material obtained by unethical means, said the 32-page document titled “Dignitas Personae” (“The Dignity of a Person”), issued Dec. 12.

But in the United States, conscience protections for medical personnel and health care institutions were at risk.

In August, the California Supreme Court upheld the rights of a lesbian to be artificially inseminated despite the religious objections of her physician, a decision that officials of the California Catholic Conference said violated the physician’s rights of religious freedom and freedom of speech.

“No one has the right to demand a nonemergency medical procedure from someone who finds that procedure morally unacceptable – or religiously objectionable,” said Auxiliary Bishop Thomas J. Curry of Los Angeles following the court’s ruling in North Coast Women’s Care Medical Group v. Guadalupe T. Benitez.

The debate over conscience rights also continued in Wisconsin, after a judge in the state upheld the official reprimand of a Catholic pharmacist who refused to dispense a contraceptive drug to a college student or transfer the prescription to another pharmacy.

In a March 24 decision, 3rd District Court Judge Michael Hoover rejected pharmacist Neil Noesen’s appeal of sanctions imposed on him by the Wisconsin Pharmacy Examining Board in 2005. In June the state Supreme Court declined to review the case.

However, Kim Wadas, associate director for education and health care at the Wisconsin Catholic Conference, said Hoover acknowledged in his decision that conscience rights under the state constitution are even broader than those granted by the U.S. Constitution, an affirmation she called a step in the right direction.

A move by the Department of Health and Human Services to guarantee the conscience rights of health care providers and institutions remained in limbo, however, as the new Obama administration prepared to take office.

Proposed regulations advanced by the administration of President George W. Bush would have required federally funded institutions to certify that they comply with laws protecting provider conscience rights. The regulations drew strong criticism from the Planned Parenthood Federation of America and other groups that support legal abortion, who said they would “permit institutions as well as individuals to refuse to provide women access not only to abortion but to contraceptive services and information.”

The abortion issue also played a role in the 2008 presidential elections, when some bishops told Catholics they should not vote for Obama because of his support for keeping abortion legal. Other Catholics said the Democratic Party would do more to reduce the number of abortions than overturning Roe v. Wade would.

During the campaign Speaker of the House Nancy Pelosi and Democratic vice-presidential nominee Joseph Biden, both Catholics, drew rebukes for their comments on abortion that Catholic leaders said misrepresented the church’s stand.