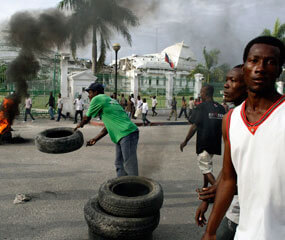 WASHINGTON – Not much has changed in the region around Port-au-Prince, Haiti’s capital, since a magnitude 7 earthquake leveled just about anything that was standing.

In fact, it’s likely the 1.5 million Haitians left homeless by the earth’s movement would say things have gotten worse since the Jan. 12 quake that killed 230,000 and injured 300,000.

Now, in addition to dealing with the aftermath of the most-severe quake to hit the country in more than two centuries, the impoverished Caribbean nation has been hit with a growing cholera outbreak.

Since cholera was first reported in Artibonite department north of the quake zone Oct. 19, the water-borne disease has spread throughout the country of 10 million. Through Dec. 4, the Ministry of Public Health and Population reported 2,120 deaths among more than 92,200 people who have been treated for the illness.

The Pan American Health Organization expects 650,000 people to contract the illness by mid-2011.

The lack of progress in recovery has characterized life in Haiti for decades, said Scott Campbell, outgoing country representative in Haiti for Catholic Relief Services, the U.S. bishops’ international relief and development agency.

“These disasters are magnified, intensified because of the dysfunction caused by government uncertainty and instability,” Campbell told Catholic News Service Dec. 7.

“It was a structural disaster before the earthquake – not having building codes and not having buildings built to standards – that crushed people and killed people. Likewise, with the cholera epidemic, the source was the incorrect dumping of waste material into the rivers. That’s an authority problem,” he said.

As in the past, the world’s response to Haiti’s disasters was immediate. In January, emergency workers from Belgium, Italy, Israel, Mexico, Canada and the United States rushed to the Caribbean within hours. Catholic aid agencies, led by Caritas Haiti and CRS, have twice called in a worldwide network of disaster response experts.

The cholera epidemic has taxed aid workers, who continue to deal with the aftermath of the disaster. Despite the challenges, CRS continues to build temporary shelters outside of the capital in an attempt to move people from vulnerable settlements into safer housing.

Given the overwhelming difficulties people face, aid workers have praised Haitians for their perseverance and patience.

Recovery efforts on other fronts have moved at a snail’s pace. Although donor nations pledged $9.9 billion through 2014 for Haiti’s rebuilding, only $265 million had been contributed as of Oct. 26, the latest date for which information was available from the World Bank.

Observers said the recovery has been hampered by the weakness of the Haitian government under outgoing President Rene Preval. His five-year term was extended after the quake, but he has rarely been seen in public. Occasional protests and graffiti around the capital have called for his ouster.

Haiti’s new president will be elected Jan. 16 in a runoff between former first lady Mirlande Manigat and Jude Celestin, Preval’s protege. They emerged as the top vote-getters in balloting Nov. 28 that whittled down a field of 18 candidates.

The election was marred by incidents of improperly maintained voter rolls, ballot stuffing and intimidation. Despite acknowledging some irregularities at the polls, the United Nations and international observers cautiously endorsed the vote.

However, shortly after the vote, the U.S. Embassy in Port-au-Prince released a statement saying the results were “inconsistent with” observations of domestic and international observers.

At the same time, the Haitian Catholic Church struggles to recover. The earthquake destroyed 70 parishes, including the Cathedral of Our Lady of the Assumption in Port-au-Prince; dozens of schools; several convents; and the national seminary.

Archbishop Louis Kebreau of Cap-Haitien, president of the Haitian bishops’ conference, has worked to rally church leadership to meet pastoral needs. But Haiti’s overwhelming poverty, coupled with the needs of the people living in makeshift shelters, has strangled the church’s ability to respond adequately.

A plan crafted largely by the U.S. Conference of Catholic Bishops and CRS was approved by the Haitian bishops in a meeting in Miami in September. Called the Program for the Reconstruction of the Church in Haiti, the plan establishes a commission with Haitian and international members that will review and approve parish projects and ensure that building plans meet modern construction standards.

An estimated $33 million contributed by American Catholics will be used for the reconstruction.

Overall, Catholics around the world contributed more than $300 million for earthquake relief and reconstruction. Americans contributed nearly half that amount through CRS and special collections in U.S. parishes.

In the absence of key church leaders, Archbishop Bernardito Auza, papal nuncio to Haiti, has taken a leading role in the effort to stabilize the church. Working with Haitian church officials, Archbishop Auza has focused his effort on encouraging leaders and developing a 650-acre Catholic campus 10 miles northeast of Port-au-Prince.

The archbishop envisions a site that would include two seminaries for 350 students, housing for men and women religious and students, a rebuilt University of Notre Dame of Haiti, a parish with an elementary school and a large-scale housing development.

Archbishop Auza told Catholic News Service in a Dec. 7 e-mail that negotiations to purchase the land were continuing.

As the anniversary approached, Haitian communities in New York, Miami and Boston were planning events to remember the disaster that has forever changed Haiti’s history. Details of memorial events in Haiti were unknown in early December.