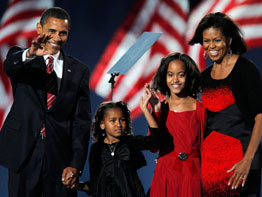 While Obama’s election was historic in many ways, the campaign between Obama, an Illinois Democrat, and Republican nominee Sen. John McCain of Arizona had its own particular religious angles of interest.

Before it came down to voters who were worried primarily about the economy, the campaign had veered off into stories about the clergy who advised or endorsed the candidates and disagreements among some in the Catholic Church about their moral obligations in voting.

The election also brought ballot measures on which the Catholic Church weighed in, including those about same-sex marriage, regulations on abortion, assisted suicide, embryonic stem-cell research, gambling and taxes to aid the needy.

At the top of the ballot, President-elect Obama won a slightly higher percentage of votes among Catholics, 54 percent to 45 percent for Sen. McCain, than among all voters, 53 percent of whom chose Obama while 46 percent voted for McCain.

Latinos were a significant factor in the Catholic portion of the vote, with 67 percent supporting Obama. Like white voters overall, white Catholics more strongly supported McCain over Obama, by 52 percent to 47 percent. Latinos make up about 40 percent of U.S. Catholics.

In the new year analysts will still be debating how much Catholic voters were influenced by the U.S. Conference of Catholic Bishops’ election guide, “Forming Consciences for Faithful Citizenship,” and by the statements of some bishops who warned that voting should be based on the candidates’ record on abortion.

One who took such a stand, Bishop Joseph F. Martino of Scranton, Pa., told the people of his diocese that abortion outweighed all other issues in voting. At a parish political forum, he said the USCCB document was not relevant in his diocese.

“Faithful Citizenship” emphasized the importance of the abortion issue in voting. But it also left open the possibility that Catholics might in good conscience support candidates who do not favor overturning Roe v. Wade, the court ruling legalizing abortion, if the voter rejects that position but has other morally grave reasons to support that candidate.

In Lackawanna County, where Scranton is located, 63 percent of voters supported Obama, compared to 55 percent of all Pennsylvania voters.

Scranton also is the childhood hometown of Vice President-elect Joe Biden, who will become the first Catholic vice president. At the USCCB meeting in November, Bishop Martino said he “cannot have a vice president-elect coming to Scranton, saying he learned his values there, when those values are utterly opposed to the teaching of the church.”

Groups such as Catholics in Alliance for the Common Good, the Matthew 25 Network, Catholics United and Democrats for Life had a significant national role in arguing that voting based on Christian morals was more complex than only seeking to make abortion illegal.

Cafardi, who is both a canon lawyer and civil lawyer, resigned from the board of trustees of Ohio’s Franciscan University of Steubenville after writing that a committed Catholic voter should consider a long list of “intrinsically evil acts” that includes but is not limited to abortion.

Kmiec, former dean of the law school at The Catholic University of America in Washington and a Republican who helped craft the Reagan administration’s legal challenges to Roe v. Wade, wrote a book explaining his support for Obama, “Can a Catholic Support Him? Asking the Big Questions About Barack Obama.”

He argued that after more than 30 years of the pro-life movement focusing almost entirely on trying to reverse Roe v. Wade, with little progress or hope for success, he was prepared to take Obama at his word that he would work to reduce abortions by measures such as providing better health care and social services aid for the poor.

At one point, Kmiec was denied Communion during a Mass for a Catholic business group by a priest who chastised him from the pulpit. The priest later apologized, after the intervention of Los Angeles Cardinal Roger M. Mahony.

At the annual USCCB general meeting in mid-November, the bishops approved a statement on the election. In it they said they looked forward to working with Obama, but went on to warn against interpreting the election outcome as “a referendum on abortion” and said “aggressively pro-abortion policies, legislation and executive orders will permanently alienate tens of millions of Americans.”

Earlier in the year, McCain and Obama both had to distance themselves from ministers who stirred controversy.

Obama and his wife severed ties with their Chicago church, Trinity United Church of Christ, after videos of bombastic sermons by its former pastor, the Rev. Jeremiah Wright, were posted on YouTube.

A Chicago archdiocesan priest, Father Michael Pfleger, was required to take a leave of absence from his pastoral duties at St. Sabina’s Parish after, as a guest preacher at Trinity, he made disparaging remarks about Democratic presidential candidate Sen. Hillary Clinton of New York.

McCain rejected the endorsement of two televangelists. The Rev. John Hagee, pastor of a San Antonio megachurch, had described the Catholic Church as “the great whore” and a “false cult system,” among other statements.

McCain also repudiated the backing of the Rev. Rod Parsley of the World Harvest Church of Columbus, Ohio, who has described Islam as the “Antichrist.”

Beyond the presidential race, in states where it was an election issue, voters agreed with the Catholic Church’s stance against legalizing gay marriage.

Voters in California, Arizona and Florida approved changes to state constitutions to define marriage as the union of one man and one woman. Connecticut voters rejected an effort to call a constitutional convention to overturn that state’s prevailing Supreme Court ruling that allows same-sex marriage.

On other statewide issues, positions taken by Catholic Church leaders were on the losing side. California rejected a proposal requiring parental notification before a minor could have an abortion, and South Dakota voters rejected a ban on nearly all abortions.

Voters in Washington made theirs the second state in the union to allow physician-assisted suicide. And Michigan voters agreed to expand embryonic stem-cell research and barred laws that would limit such research or treatments.

Gambling initiatives opposed by the local church in Maryland and Ohio passed, allowing slot machines in the former and a privately owned casino in southwestern Ohio.

Measures passed in two Missouri counties to raise money for children’s services with a sales tax increase. A Massachusetts effort to repeal the state income tax failed. The local church had supported each of those outcomes as necessary to help meet the needs of the poor.