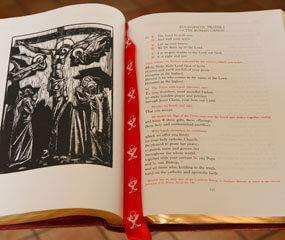 WASHINGTON – A year from now, the liturgical celebrations of the Advent and Christmas seasons will have a different sound, as the new English translation of the third edition of the Roman Missal begins being used in U.S. parishes.

The transition to the new translation took up most of the past decade and has not been without its rough patches, with some bishops, priests and laypeople criticizing changes in wording meant to bring the translation more closely into alignment with the Latin original.

But Bishop Arthur J. Serratelli of Paterson, N.J., who, as chairman of the USCCB Committee on Divine Worship for the past three years, shepherded the missal through its final approval by the Vatican in 2010, said just before stepping down as chairman that catechetical preparation to implement the new translation was proceeding in U.S. parishes “with much enthusiasm and wide acceptance by both clergy and laity.”

Announced by Pope John Paul II in 2000 and first published in Latin in 2002, the missal is the book of prayers used in the worship in the Latin-rite church. It underwent a lengthy and rigorous translation process through the International Commission on English in the Liturgy, followed by sometimes heated discussions over particular wording at USCCB meetings until it received final approval from the U.S. bishops in November 2009.

Other English-speaking bishops’ conferences went through a similar process and submitted recommended changes to the Vatican’s Congregation for Divine Worship and the Sacraments.

People attending Pope Benedict XVI’s Masses in Scotland and England in September got a chance to hear and sing a few of the newly translated Mass texts.

Monsignor Guido Marini, papal master of liturgical ceremonies, said the prayers sung in English at the papal Masses in Great Britain used the translations from the new Order of the Mass approved by the Vatican in 2008.

Although the new translation of the Order of the Mass, which contains the main prayers used at Mass, was approved by the Vatican two years ago, bishops’ conferences in English-speaking countries decided to wait to introduce the prayers until the entire Roman Missal was translated and approved.

U.S. church leaders hope that clergy and lay Catholics are getting ready for the new translation with resources prepared by the bishops’ Secretariat for Divine Worship and the Federation of Diocesan Liturgical Commissions.

A variety of resources are available for priests, parish groups and individual Catholics through the bishops’ website at www.usccb.org/romanmissal.

“Cards and other participation aids containing the responses of the people will be available for use during the transition, but it is hoped that within a year’s time (after the Nov. 27, 2011, introduction) the people will become freed from the use of such cards.”

Bishop Robert N. Lynch of St. Petersburg, Fla., recently invited all the priests of his diocese to a talk by Bishop Blase J. Cupich of Spokane, Wash., about the new translation.

“What we will be praying will be slightly different, more faithful to the Latin tradition and texts, and, I think, after some getting used to, has the possibility of enhancing our celebration of the source and summit of our faith, the Eucharist,” Bishop Lynch wrote in his blog after the talk.

With the proper catechetical preparation, he said, “only a stranger in church on the first Sunday of Advent next year will come to the church unaware of what that day will bring and most of us will come saying, ‘I embrace this change.’“