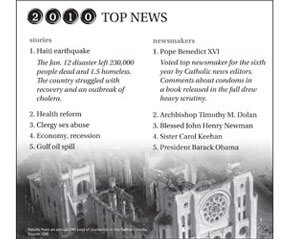 WASHINGTON – The devastating January earthquake in Haiti and the recovery and rebuilding effort that followed it topped the religious news stories of 2010, and Pope Benedict XVI was again the top newsmaker, according to the annual poll conducted by Catholic News Service.

The debate over health care reform, which bruised both the political system and the unity of the U.S. Catholic Church, was a close second among the 30 news stories on the ballot. Continuing revelations about clergy sex abuse, especially in Europe, took third place.

Among the 25 newsmakers on the ballot, Pope Benedict was the clear first-place winner. Archbishop Timothy M. Dolan of New York, elected in November as president of the U.S. Conference of Catholic Bishops, was second and Blessed John Henry Newman, beatified by Pope Benedict during a September visit to England, was third.

The poll was the 49th annual survey conducted by CNS. This year’s ballots were distributed Dec. 3 and the deadline for returns was Dec. 9.

When the editors’ poll was first conducted in 1962, the overwhelming choice for top story was the opening of the Second Vatican Council. Last year, editors chose the health reform debate as the top religious story of the year and Pope Benedict as the top newsmaker, closely followed by U.S. President Barack Obama.

With 28 editors and CNS staff members submitting ballots, the maximum points a story could have received was 280. The most a newsmaker could receive on the five-point scale was 140.

Rounding out the top five for religious news stories were the continued problems facing the global economy and the BP oil spill in the Gulf of Mexico.

Pope Benedict, who has been the top religious newsmaker in the CNS poll every year since 2006, took first place this year for his travels to Malta, Portugal, Cyprus, England and Scotland; his continued efforts against clergy sex abuse as new accusations surfaced in Europe and elsewhere; and the revelations in a book of interviews he conducted with a German journalist.

Among newsmakers, Sister Carol Keehan, a Daughter of Charity who is president and CEO of the Catholic Health Association, was fourth and President Obama was fifth.

Here are the choices for top 10 stories and top five newsmakers of 2010, followed by points received in the weighted ballot count and, in parentheses, the number of first-place votes received.