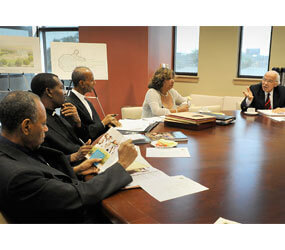 NEW ORLEANS – The government of Qatar came to the rescue of Xavier University of Louisiana after Hurricane Katrina, and now the oil-rich Middle Eastern country is determined to do something similar for earthquake-ravaged Haiti.

Norman Francis, president of Xavier, sits on an ad hoc committee created by Qatar that will analyze proposals for approximately $20 million in grant money that Qatar has earmarked for recovery projects in Haiti.

After Katrina, Qatar gave Xavier a $12.5 million grant to build a new pharmacy building and $5 million in scholarships for students affected by the storm.

Francis and a team of top administrators hosted two Haitian bishops and the rector of the Catholic university in Haiti to flesh out ideas for a proposed collaboration between Xavier and the Universite Notre-Dame d’Haiti that could involve exchanges of students and professors as well as the creation of a school of pharmacy and an expanded teacher certification program in Haiti.

Archbishop Guire Poulard of Port-au-Prince, Bishop Pierre-Antoine Paulo of Port-de-Paix and Monsignor Pierre-Andre Pierre, rector of Universite Notre-Dame d’Haiti, spent Aug. 30-Sept. 1 at Xavier to discuss their needs and what joint initiatives might be most effective.

“This is a great opportunity to partner with Xavier University,” Monsignor Pierre said. “We have common ground. We have common values. It would be the first Catholic university in Haiti partnering with the first university created by St. Katharine Drexel in the United States to serve the black people here. For us, it is very meaningful.”

Notre-Dame d’Haiti was founded by the Haitian bishops in 1996 and currently has about 3,000 students studying at campuses across Haiti.

Qatar has set aside about $20 million for recovery projects, and the committee of which Francis is a member will make a proposal by the end of September for the educational collaborative. A team of five Xavier administrators is scheduled to fly to Port-au-Prince in mid-September to meet the staff and students of the Haitian university.

“They’ve explained very well the lay of the land, but there’s nothing like going and seeing it firsthand,” Francis said.

Notre-Dame d’Haiti has a medical school already in place in Port-au-Prince, but one idea is to establish a pharmacy school, using the foundational science courses already being offered and to build from there, Francis said. Haiti has only one pharmacy school in a public university.

Also, the bishops emphasized Haiti’s desperate need for trained teachers at the kindergarten through 12th-grade level.

“We can’t build homes or do irrigation projects, but we can help develop the human capital of skilled professionals so that they would be able to go back to Haiti and help develop the next level and the next level,” Francis said. “We think education is really the key to that. The archbishop said the K-12 system is very important to him. He’s very much concerned about the elementary schools and the high schools, and that’s one of our strengths.”

Archbishop Poulard told Francis that getting certified teachers in the K-12 classrooms was an important goal.

Francis said one challenge that might have to be overcome if Haitian students come to Xavier to study on scholarship is that when they graduate, they are very marketable and may not want to return to Haiti. For example, pharmacy graduates can command salaries of $100,000 annually.

“Maybe we could do what the Army does and a lot of other governments do: the student signs a contract to work for four years after graduation in the home country,” Francis said.

Xavier is one of only two universities in Louisiana with a school of pharmacy. One possibility under the new collaboration would be to have fourth-year pharmacy students make their six-week residency in a Haitian hospital.

“It would be a great opportunity to go and see not just the poverty but the different degrees of suffering as well as what services are needed as pharmacists,” Francis said. “It would be eye-opening for a young 21-year-old to see that.”